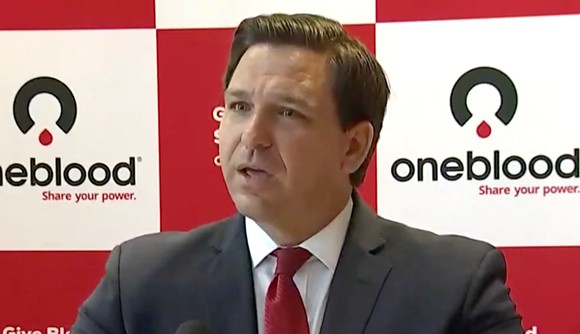 Another day, another angry heckler at one of Gov. Ron DeSantis' press conferences, this time on Monday at an Orlando OneBlood donation and testing center.

DeSantis was speaking to reporters about two minutes into the press event, which was initially planned to be held outside, when protesters began shouting mid-sentence.

After his eyes briefly bugged out in surprise, DeSantis watched as officers removed the protesters from the blood bank, before he exclaimed, "And we will not be defunding the police, don't worry about that! We're going to be supporting our men and women in law enforcement."

His comments were a partisan response to recent street protests which have called for police departments nationwide to be restructured, funding more social services and unarmed divisions to handle the de facto social work that police are often called to perform.

On Monday, days after #DeathSantis began trending on Twitter, and as the state reached a grim record-high week of 80,236 new positive cases from Sunday to Sunday, the governor was still refusing to issue a statewide mask order — despite ample scientific evidence and federal guidelines affirming it will save lives.


"And we will not be defunding the police, don't worry about that!" DeSantis said, as protesters were removed from the room. tweet this
DeSantis has faced increasing hostility from Democratic lawmakers, locally elected officials and the general public, for interpreting statewide numbers in a way that deemphasizes the seriousness of current spikes, including a rhetorical reliance on positive-testing percentages or the ages of those infected as mitigating factors.

DeSantis continued speaking over the protesters on Monday, who could still be heard from outside, yelling and banging on the windows, for the remainder of the conference.

"Donate your plasma, it’s very, very important," DeSantis said toward the end of his statements.

"We are getting record-breaking cases every day, and you are doing nothing!" shouted an activist in attendance.

You can watch the exact moment Orlando's hometown protesters shake up DeSantis' day:
_
Please follow CDC guidelines and Orange County advisories to stay safe, and please support this free publication. Our small but mighty team is working tirelessly to bring you news on how coronavirus is affecting Central Florida. Please consider making a one-time or monthly donation. Every little bit helps.