A new video shows an unprovoked attack from Tampa Police officers against non-violent protesters at a demonstration held on July 4.

The video, which was posted to Facebook by GR Goodwin on July 19, shows a crowd of about 100 people peacefully and non-violently blocking traffic on North Dale Mabry Highway, as they headed north past Spruce Street.

“Here come the popes, oh shit,” says Goodwin in the video. At the 36-second mark in the clip, officers can be seen rushing into the crowd on bikes and violently pushing over at least one protester.

A thrown object is visible at the 1:07 mark, but this happens more than 30 seconds after officers are seen fighting with protesters, and after an officer let off a single burst of pepper spray.
It’s important to note that while blocking traffic is illegal, it’s also a common, nonviolent form of civil disobedience, and should warrant a nonviolent response from law enforcement.

On July 4, the Tampa Police Department released a statement to the Tampa Bay Times, saying that TPD targeted “organizers and leaders of the protest,” after several warnings to disperse.

“While attempting to lawfully arrest one subject, officers were surrounded and a large group began to close in on the arresting officers and the officers who were working to provide security,” the department said. “Members of the group began pushing against bike officers, who deployed two short bursts of O.C. (pepper) spray to push the group back.”


Officers can be seen rushing into the crowd on bikes and violently pushing over at least one protester. tweet this
One protester, 21-year-old J’Khari Wilson, who the Times said “faces a felony charge of criminal mischief resulting in damage of $1,000 or more and misdemeanor charges of resisting arrest without violence and violating city ordinance 14-41,” disputed the Tampa Police Department’s version of events and said there’s video evidence to back up his claim.

“There’s video evidence that shows that never, ever happening. I got charged by the officer while I was backing up and fearing for my life. He pushed me into the car and video evidence shows that,” said Wilson to the Times.

When Creative Loafing Tampa Bay reached out to the TPD for further comment, a spokesperson said, "We’ve already released a statement on this event." 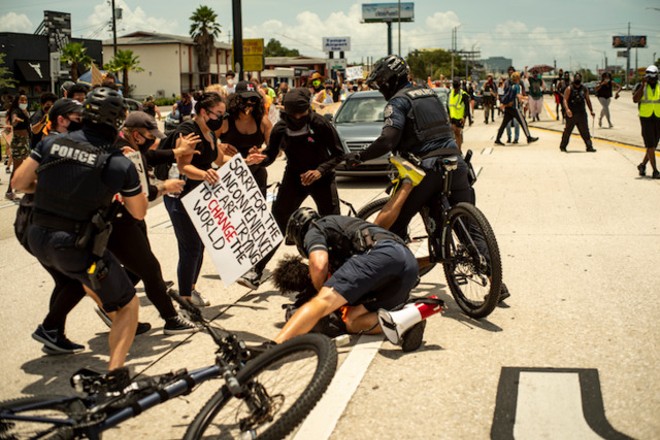 Three CL photographers – Chandler Culotta, Dave Decker and Ashley Dieudonne – were there covering the protest that day and documented the scuffle. In a series of photos, officers can be seen on the ground struggling with protesters, as well as firing pepper spray. The photos below are not of J’Khari Wilson.

Since the protests began last March after the killing of George Floyd by Minneapolis Police officers, the Tampa Police Department has also been embroiled in accusations of excessive force, specifically against Black Lives Matter demonstrators.

According to a 2019 Response to Resistance internal report obtained by CL, use of force during arrests by TPD has jumped by 24 percent under Chief Brian Dugan, and a closer look at the report shows that 15 out of the 25 categories that track use of force techniques by officers saw a significant increase. However, the biggest jump was with chemical agents. Under Dugan, TPD’s use of pepper spray and tear gas has grown by 223 percent.

Despite calls from protesters for sweeping police reform and for the removal of Dugan, Tampa Mayor Jane Castor has stood by her chief. On June 25, spokesperson Bauman told CL in a text message that "Dugan is the chief at TPD and there have been no discussions about a change at the top."

Last week, Dugan announced the creation of a new “Chief's Community Advisory Team,” which seeks "suggestions on how officers can build better relationships and trust within the community."

Dugan's announcement came on the heels of Mayor Castor's June 19 announcement that she'd be holding meetings for her own task force on policing. Members of that task force told CL that they left the first meeting on June 27 feeling skeptical, but one attendee of the task force's most recent meeting on July 18 would only speak on background to say that there was "constructive conversation" within their task force group. 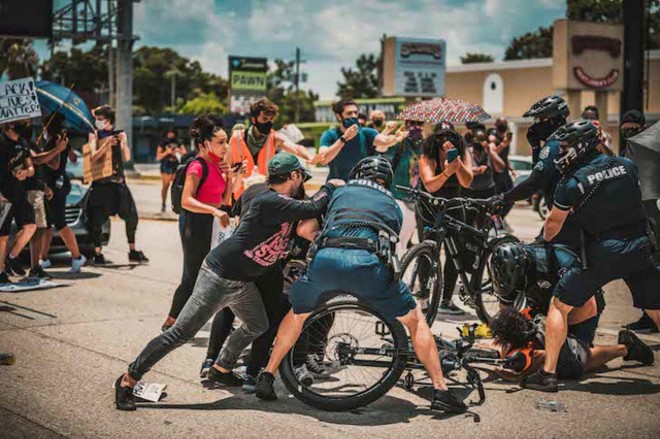 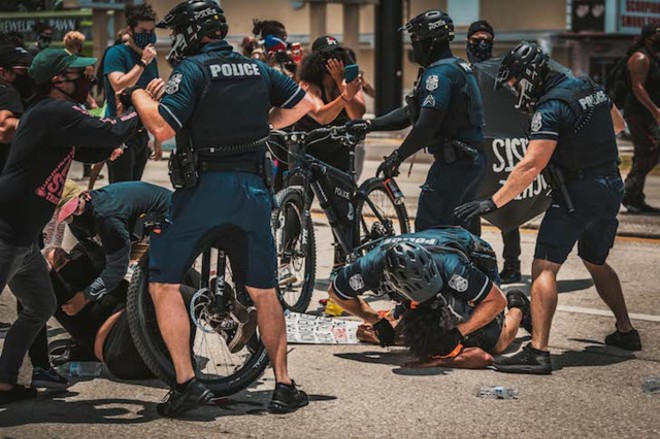