Florida just recorded more COVID-19 deaths than any other state 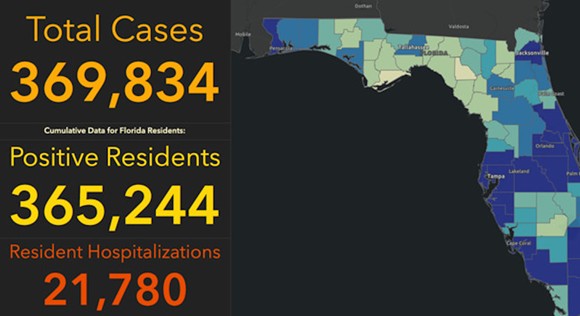 According to the Florida Department of Health, as of Tuesday, Florida logged 134 new deaths, which is the state’s second highest amount for a 24-hour period. The total number of lives lost statewide to COVID-19 since March 1 is now 5,206. The state’s daily death average for the past week is now 115.

Florida also added 9,440 new positive cases Tuesday. This brings Florida’s total positive cases since the start of the pandemic to 369,834. On top of this, the state witnessed a record-high number of 518 new hospitalizations Tuesday, according to the Florida Department of Health.

Florida’s average rate of new positive tests is now at around 19 percent, compared to about 10 percent a month ago, as recorded by Johns Hopkins University. This leaves the state with the fourth highest positivity rate in the U.S., trailing behind Arizona, Nevada and Idaho.

While Florida case numbers continue to rise, testing irregularity has been recorded across the state due to reporting delays; Numbers recorded each day may not reflect true rates of the past 24 hours. The Florida Department of Health has been found to be emphasizing negative re-tests, meaning the state’s positivity rate may at times be skewed and not indicative of the reach of the virus.

Florida Gov. Ron DeSantis has been met with much criticism and hostility for his refusal to issue a statewide mask mandate despite federal guidelines and scientific evidence, as Florida cases continually surge and break records. Most recently, the governor faced protestors at a Monday press conference, attempting to address DeSantis’ record of deemphasizing Florida positivity and death rates.