WonderWorks and other small Orlando attractions must evolve to survive, making some changes permanent 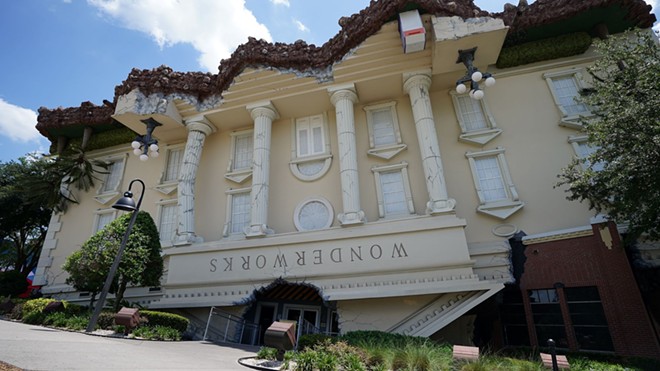 The past few weeks have seen attractions around the country start to reopen, but for many, the new COVID-induced reality means rethinking the entire guest experience.

While much attention has been paid to how Orlando's flagship attractions like Disney and Universal are responding, smaller regional attractions are also facing their own challenges, with smaller budgets.

The cornerstone of WonderWorks’ response was the expected laundry list of precautions now embraced by most companies. This includes social distancing, health screenings for team members, masks where required, signage and markings, and better hygiene protocols. More than two dozen additional hand sanitizer stations have been placed throughout the 35,000 square foot Orlando attraction, as well. WonderWorks has also gone cashless, and created a "clean team" to ensure compliance. They educate guests on the newly updated protocols before they enter.

"All Team Members that we brought back had to go through a new orientation/training on COVID-19 safety procedures," said Wayne. "We felt that training was the number one priority before implementing our new procedures. Secondly, we added enhanced cleaning. We do a deep cleaning of the building in the morning before we open and in the evenings after we close."

WonderWorks surveyed previous guests prior to reopening, finding that some worried about large crowds, while a few said they would not visit an attraction where masks were required. tweet this
The ropes courses at WonderWorks attractions go through extra cleanings, too, including deep cleanings of all harnesses and sling lines several times a week. Those upcharge attractions have seen their hours limited to ensure employees have the time required for the most extensive cleaning protocols.

Throughout the pandemic, Gateway Ticketing Systems, a leading attraction admissions management company, has hosted weekly webinars with attraction leaders. In a post published on industry news site Blooloop, Gateway senior marketing manager Greg Banecker reflected on the knowledge learned from these sessions. He said one of the most important aspects of any attraction’s reopening plan must be employee communication despite much of the focus of many attractions so far being on ensuring guests are well informed.


WonderWorks looked to its sister attraction, Alcatraz East in Pigeon Forge, Tennessee, to see what was working in regards to the COVID-19 response plan. That attraction opened before any of the WonderWorks and allowed the team to review both employee and guest feedback, which, according to Wayne, was positive.

A number of attractions, including WonderWorks, surveyed previous guests prior to reopening. Those surveys found the most significant deterrent to visiting an attraction was fear of crowd levels being too large, though a handful of respondents reported that they would not visit an attraction where masks were required. Central Florida leaders have ensured all businesses, including attractions, enforce a mask policy. On the WonderWorks Orlando website, a popup informs guests of the requirement with a link directly to the Orange County Emergency Executive Order.

Five of the six WonderWorks have now reopened, with three, including Orlando’s, requiring guests to wear masks.

In Utah, where, like in Florida, masks are not required by a state mandate, the Loveland Living Planet Aquarium strongly encouraged guests to wear them. According to Banecker, the aquarium saw 70 percent of guests wearing masks on the opening weekend, but within two weeks, that number had dropped to 30 percent. Banecker notes, “If you’re not requiring masks, you can likely expect something similar.”

Banecker pointed to the World War II Museum in New Orleans, where a mask mandate is also in place. There, staff members and security located at the entrance hand out masks to guests not wearing them and have seen much higher rates of guest satisfaction with this non-confrontational technique.

Other findings of the guest surveys showed that cleanliness and ensuring social distancing topped the list of actions an attraction can do to reassure guests. WonderWorks used these findings to ensure guests would feel comfortable in its attractions; this meant decreasing the number of guests who can be admitted.

“One thing we have had to adjust to at WonderWorks is the limited capacity. Right now, we are running at about 35 percent capacity so that all of our guests are allowed to properly distance themselves from others. This is a big change compared to our normal, full capacity levels,” explained Wayne. “We also continue to monitor the flow of traffic throughout the day, so that all floors of the building are not overcrowded, and queues and lines are marked with appropriate distancing markers.”

Some attractions, like the Perez Art Museum Miami, where indoor exhibits remain closed, have shifted to offering more outdoor programming. SeaWorld Orlando has turned part of its parking lot into a makeshift drive-in movie theater where guests can enjoy both a movie and a firework display. On its website, Icon Park mentions its large number of outdoor dining options and assures, “the Wheel’s air conditioning system draws in fresh outside air.”

By far, one of the most concerning aspects for high-touch attractions during the ongoing pandemic is surface contamination. On the section of the website explaining their safety protocols, WonderWorks includes information on the latest knowledge regarding surfaces. The website reads, “CDC now says Coronavirus doesn’t transmit easily through touching surfaces” with a link to a related news story. Though, it should be noted  Wayne was clear that the company was still cleaning surfaces more frequently.

Still, many guests remain hesitant to embrace tactile, hands-on exhibits. The WWII Museum has seen success with giving guests a stylus that allows them to interact with touchscreens without actually touching them. Experience design and production firm Thinkwell has developed apps that enable interactive mirroring, where the interactive screen is mirrored onto a guest’s smart device, allowing for them to use that instead of the shared touchscreen.

One of the best solutions might be something that was already proven successful years ago. When Legoland Denmark debuted its new Ninjago 4D dark ride in 2016, it used a groundbreaking technology developed by ride design firm Triotech. Former 4D interactive rides, such as Disney’s Toy Story Mania, requiring a physical trigger to be used, but Ninjago had a built-in motion sensor allowing for guests to interact via hand motions alone. The technology is similar to that used in an Xbox Kinect and is surprisingly intuitive for most guests. For Legoland, the attraction was a smash hit and has since been added to Legoland parks around the world, including at Legoland Florida.

Despite all of the promising ways attractions are evolving, the reality remains that some attractions will ultimately go under during this time. In speaking with NPR, the Association of Children’s Museums executive director, Laura Huerta Migus, said families have yet to return to many of their museums. In that interview, which took place at the beginning of the month, Migus stated the ACM is worried that the industry may see a closure rate “approach 30 percent.” According to NPR, this would mean 100 museum closures within the ACM alone.

Attractions as large as the Oakland Zoo are now teetering on the edge of permanent closures thanks to the pandemic. In Orlando, permanent closures have already begun impacting the tourism sector with recent closures, including I-Drive’s WhirlyDome, with more expected in the coming months.

Some attractions have reopened and then decided to close again due to low attendance. That’s something that Orlando attractions are trying not to do with everyone from Disney to the observation wheel at Icon Park instead shifting to a shorter operating schedule along with other cost-cutting initiatives. Some attractions have already begun moving to automation as a way to lower costs, and others have begun embracing mobile ticket sales in an effort to cut down on their POS system expenses.

While a potential vaccine to COVID-19 may eventually mean the infection worries of today can be forgotten, many of the safety precautions and updated ways of interacting with exhibits that have been put in place will likely remain. We now live in a world with a heightened awareness of hygiene safety, and for attractions large and small, that reality won’t disappear even once the pandemic does.