Three tropical storms brewing in the Atlantic, one may be headed towards Florida 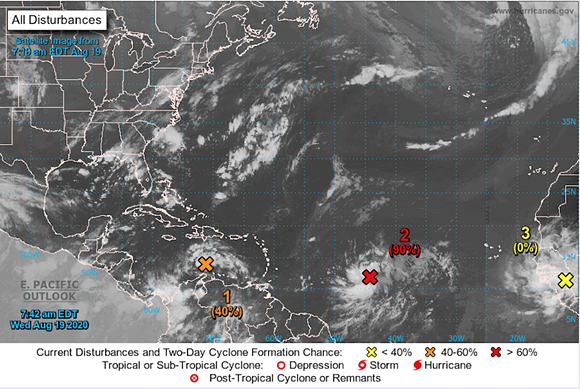 Forecasters with the National Hurricane Center are currently eyeing three systems in the Atlantic, and two have a high chance of developing over the next couple days.

In a Wednesday morning advisory, the NHC says there are currently three systems to watch in the Atlantic, with the most recent just off the coast of Africa. That tropical wave has a 20 percent possibility of development over the next week.

However, at the moment, it’s the two closer systems that forecasters are keeping an eye on. The first is a system moving about 20 mph in the eastern Caribbean Sea. Over the next two days, this system has a 40 percent of development, but will increase to 80 percent over the next five days.

We are tracking 3 tropical waves that have the potential for tropical cyclone development. The disturbance with the greatest chance for development in the next couple of days is the one approaching the Leeward Islands. More info: https://t.co/tW4KeFW0gB pic.twitter.com/Vsemc2a6Fa


If this system develops, it will be called Tropical Storm Laura, which would be the 12th named storm of the season. If that happens before the end of the month, then 2020 would then tie 2005 for the most tropical storms in history entering September.

As of now, models project the storm will pass through or around Florida next week, but forecasters say it’s too soon to make any predictions on where this system would go.

So far, the 2020 Atlantic Hurricane has been busy. The National Oceanic and Atmospheric Administration previously forecasted that the 2020 season would be extremely active, with about 19 to 25 named storms.