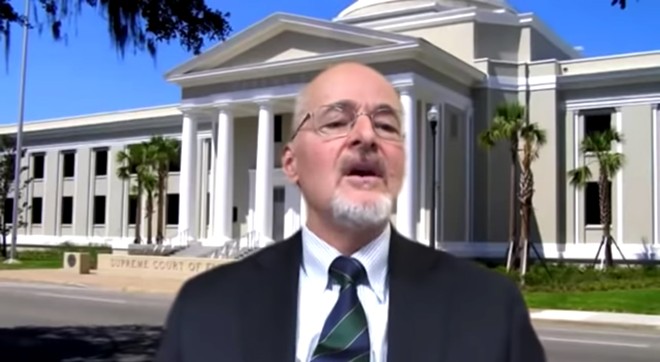 Florida Supreme Court Chief Justice Charles Canady apologized on Wednesday for a postponement of the Florida Bar exam, which was supposed to take place online Wednesday but was canceled late Sunday evening.

The court “deeply regrets this additional delay” in the administration of the exam, Canady said in a video posted on the court’s Facebook and YouTube social media sites.

An in-person exam was originally slated to take place in July but was rescheduled to an online test because of COVID-19. On Sunday night, the Florida Board of Bar Examiners, which is overseen by the Supreme Court, called off the plan to hold the exam this week because it was not “technically feasible.”

The cancellation, issued on the eve of a scheduled live trial of the software, ignited a frenzy on social media among people planning to take the exam and their supporters, who have urged the Board of Bar Examiners to drop the test altogether this year or to replace the multiple-choice exam with essays submitted by email, as some other states have done.

“Our inability to offer the Bar examination in August was a failure. We apologize for that failure,” Canady said in Wednesday’s video.

"Our inability to offer the Bar examination in August was a failure. We apologize for that failure." tweet this
The Board of Bar Examiners announced Sunday that the exam will occur sometime in October. In Wednesday’s announcement, Canady said the court understands that “a three-month delay in licensure is a serious matter —- a disruption in life that takes a financial toll and an emotional toll.”

The court is “seeking to mitigate the impact” of the delay through a “supervised practice program,” he said, adding “we are keenly aware that this program is a stopgap measure that will provide limited relief to a limited number of applicants.”

Canady’s apology appeared to stoke furor over the delays.

“This does nothing to help us. It reassures that we will continue to be harmed mentally, financially, & professionally,” Johnny Carver, who graduated from the University of Miami School of Law this spring, tweeted on Wednesday.

People slated to take the exam have also complained that the Board of Bar Examiners ignored their concerns, such as technical problems with the ILG Technologies software used for the test.

“We acknowledge and accept the criticism that has been directed at the court and the Board of Bar Examiners,” Canady said. “I can’t guarantee you that the path forward will be flawless, but I can guarantee you that we have learned from this mistake and that it will not be repeated.”
_
Please follow CDC guidelines and Orange County advisories to stay safe, and please support this free publication. Our small but mighty team is working tirelessly to bring you news on how coronavirus is affecting Central Florida. Please consider making a one-time or monthly donation. Every little bit helps.