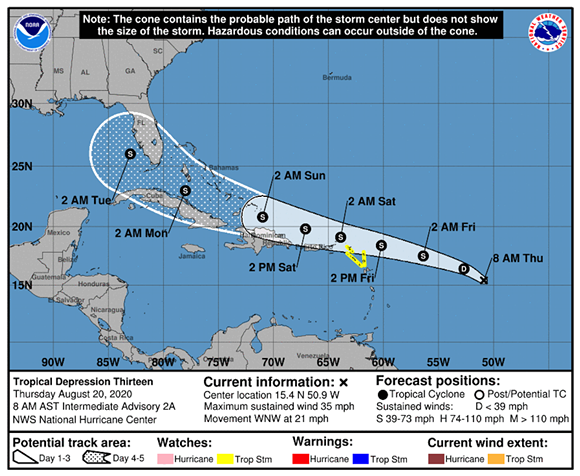 According to the 8 a.m. advisory from the NHC, parts of Central Florida are located within TD 13’s cone of uncertainty, but it’s still too early to know exactly when and where the system will land.

It’s also too early to predict the exact strength of TD 13, with some models showing the depression dissipating and others showing it strengthening into a hurricane over the next five days.

As of now, the system is moving west-northwest at around 21 mph, and is currently located about 830 miles east of the northern Leeward Islands. This storm is expected to strengthen into a tropical storm later today, and if it does, it will be called Tropical Storm Laura.

TD 13 should pass near the Leeward Islands sometime late Friday, then head north of the Virgin Islands and Puerto Rico on Saturday.

Meanwhile, forecasters are also eyeing two other systems moving west. The first is a tropical wave in the Caribbean with a 90 percent chance of developing into a tropical depression or tropical storm in the next two to five days. The wave is expected to pass over the Yucatan Peninsula over the weekend.

If either of these two systems strengthen to a tropical storm, they’ll be named Marco.

We’re now at 12 named storms in the 2020 Atlantic hurricane season, which is now the earliest we’ve ever reached this point. We’ve also already logged two hurricanes.