In yet another reminder that this state is basically Jurassic Park, a 100-pound Suwannee alligator snapping turtle – the largest freshwater turtles in North America – was recently pulled out of a river by researchers with the Florida Fish and Wildlife Conservation Commission.

According to a Facebook post from the FWC, the prehistoric-looking snapper was captured in the New River, which is near Gainesville. "The New River is a blackwater stream with low biological productivity, so finding a large turtle in such a small stream is unusual," the agency wrote in the post.

Researchers set six 4-foot traps along the river, which also yielded a 46-pound female and a 64-pound male. All three turtles were released, according to the FWC.

Suwannee alligator snapping turtles, also known as Macrochelys suwanniensis, are considered a "species of special concern," and they’re also a newly named species the agency helped discover in 2014. As of now, the FWC is working with researchers from Georgia to help document and collect data on the species.

According to National Geographic, the species can live up to 100 years old, and males can weigh up to 220 pounds. Here in Florida, the species can be found in rivers, lakes, backwater swamps, and brackish water systems in the Panhandle and Big Bend regions. 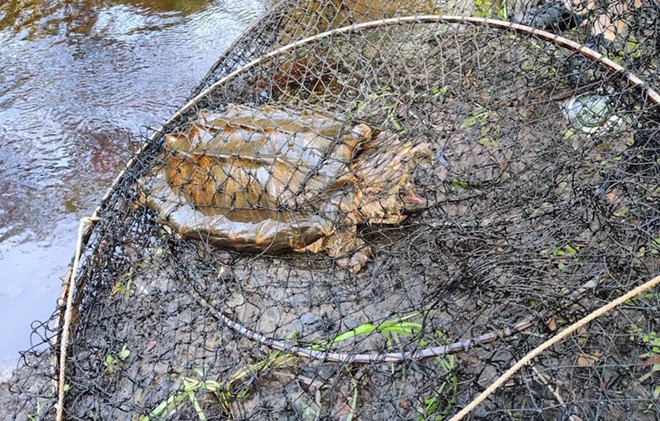