As Disney works to address racism in park properties, fans speak up about the lack of diversity in company leadership

As the nation continues with unwinding the racist ideology that is found within nearly every aspect of it, like all major corporations, Disney is working to usher in a new chapter of inclusion. Those efforts include finally ridding the parks of references to the unambiguously racist Song of the South film and reportedly creating a new Diversity and Values team to review further actions that need to be done within Disney Parks.

Orlando Weekly recently sat down with Chris Wakefield. The bi-racial queer father from the Midwest has been an outspoken critic of Disney’s lack of leadership diversity. Wakefield, who is a journalist and marketing/communications consultant by day, is known within the Disney fan community for his long-running theme park podcast. He was one of the earliest diverse voices within the overly white theme park podcasting community.

Wakefield thinks the Diversity and Values team is a step in the right direction, but notes that it’s just the start of what needs to be done. “It is a great start. But I would caution Disney to not fall into some of the same traps as other organizations, where an inclusion director is hired and the organization thinks that has solved the problem. Creating a diversity and inclusion team is like hiring a doctor to find out if you have cancer. It doesn't cure cancer; you are just finding out where it is and how easy it is to treat or cure.”

He also doesn’t place blame on clearly racist tropes in Disney films such as Song of the South and Dumbo, pointing to the notably racist American culture in which they were created. Instead, he points to efforts by some Disney fans today, attempting to ignore the racist tones of the films in an attempt to keep the properties within the parks.

“My problem is not so much with the films themselves, which are slightly a product of their time. Marginalized people are used to seeing this kind of insensitivity in older films. My bigger concern is with the people today who double down and insist that there is nothing wrong with the film and refuse to acknowledge how it may be seen as hurtful someone else. Their complete lack of empathy for anyone who looks different is alarming.”

Despite removing Song of the South, by far the most problematic in Disney’s depressingly extensive library of films with overtly racist tropes, more than three decades ago, Disney waited until just this month to remove references to the movie from Disney Parks websites. In Disneyland, songs from the film’s soundtrack were removed in recent days, but at Disney World, the songs are still playing and merchandise featuring characters from the film can still be found in gift shops.

When asked why he thought it has taken Disney so long to address racist tropes, including in a film that they have tried to ignore since the 1980s, Wakefield pointed to recent events that have caused companies like Disney to reevaluate how they might be personally contributing to racial divides.

“[Until recently,] Disney did not see it as a big problem. It wasn't until Disney sat back and asked themselves, ‘Could our films be contributing to the way people of color are being treated in America?’ If everyone in America could look at their behavior and actions this way, we might be better off.”

In late 2019, Wakefield, who works for a prominent national publication, took to Twitter after a Disney published a photo of workers on the site of Tron coaster at the Magic Kingdom, showing a seemingly all-white workforce. In the Twitter thread, he claims that “the last time I mentioned a lack of people of color at Imagineering, Disney got mad and took my media access away.”

Wakefield went on, “Black kids need/deserve role models in Imagineering” because “kids seek out role models who look like them.” He also criticized Disney+ miniseries The Imagineering Story, stating, “Many kids of color watching the Imagineering doc on Disney+ could easily think that this job isn’t for people of color. It’s all white people in the documentary.”
While speaking with Orlando Weekly, Wakefield explained why he’s so passionate about ensuring theme park companies like Disney have a diverse workplace. “It is important that black and brown kids see themselves reflected in society. The recent death of Chadwick Boseman underscores that. There are now millions of kids worldwide who are now empowered by his portrayal of Black Panther. Twenty years ago, my generation didn't have that.

“The same can be said for Imagineering at Disney. The lack of diversity is jarring. How can a company this large, with this many resources, not find at least four or five black people with engineering degrees who like theme parks? If you want to make rides and attractions for everyone, then everyone should be in on the ride-making process.”

A Black Imagineer, Charita Carter, is leading the Princess and the Frog reimagining of Splash Mountain. Having served in Imagineering for 23 years, Carter’s recent success with the highly praised Mickey and Minnie’s Runaway Railway attraction has made her a bit of a rockstar. When promoting the new attraction, now at Hollywood Studios and soon to be replicated at Disneyland, Carter did interviews with Black media sites such as Black Girl Nerds along with the typical industry and fan sites. 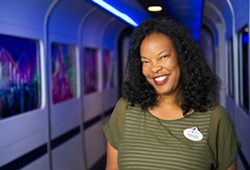 So far, Imagineers such as Carter are still the exception within Disney. Wakefield thinks this must change if the company expects to truly advance the diversity it claims to hold important.

“The easiest solution is to give marginalized people a seat at the table. And I don't mean a special panel at next year's D23. Hire them. And I don't mean to work the popcorn cart on Main Street USA. Hire them into positions of influence and power. If you want your product to survive into the next generation, it would be wise to have a creative staff that reflects what America looks like.”

Despite so little diversity within leadership and decades of inaction regarding racist tropes within the parks, Wakefield still feels welcomed at Disney. “As a frequent guest of the Disney parks, I feel totally comfortable there. I feel fine bringing my child and family there. Do some things need to be addressed? Yes. Do people of color need more and better representation in the parks? Yes. But I would stop short of calling it racism.”

Disney has given no timeline for when it plans to close Splash Mountain for the Princess and the Frog reimagining.