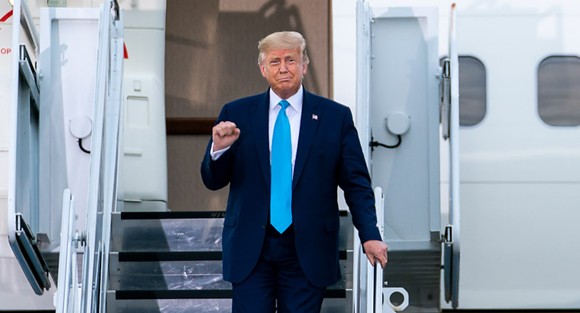 President Donald Trump, giving in to pressure from members of his party, signed an executive order Tuesday extending a moratorium on oil drilling off Florida’s shores as he ramped up his 2020 re-election effort in the critical battleground state.

Trump acknowledged he didn’t plan to take action on the moratorium during an afternoon speech beneath the Jupiter Lighthouse. But the president said he was challenged by senators and others, including Gov. Ron DeSantis, who contended such an order would make him the top environmental chief executive since President Teddy Roosevelt more than 110 years ago.

“Who would have thought Trump is the great environmentalist? You hear that? Did you hear that? That's good. And I am, I am,” Trump said during the speech that highlighted efforts to protect the Everglades and often diverted into campaign rhetoric.

The order extends to June 30, 2032, a moratorium on offshore drilling in the eastern Gulf of Mexico, east of the Military Mission Line, and adds the South Atlantic coast of Florida, Georgia, and South Carolina to the moratorium. The action came more than two years after Florida officials were assured the state’s coastline wouldn’t be opened as part of the administration’s effort to expand oil and gas production nationwide.

Republicans were quick to tout that the order protects the environment and the state’s tourism economic engine.

“Our oceans are a major driver for economic activity and are worth protecting at all costs,” tweeted state Chief Financial Officer Jimmy Patronis, who along with DeSantis and Attorney General Ashley Moody, attended the event held in Jupiter.

"Who would have thought Trump is the great environmentalist? You hear that? Did you hear that? That's good. And I am, I am," Trump said during the speech. tweet this
A day earlier, a massive boat flotilla for Trump converged on the Jupiter Inlet.

U.S. Sen. Marco Rubio, R-Fla., said he will continue to push the Senate to make the moratorium permanent.

“In my many conversations with the president and members of his administration, it was clear they were well aware of Florida’s unique and vulnerable coastal character and that most Floridians are opposed to allowing offshore drilling off of the state’s coasts,” Rubio said in a prepared statement.

Democrats and many environmentalists spent Tuesday scoffing at the notion of Trump touting his environmental record, noting that Everglades and Lake Okeechobee restoration efforts have bipartisan support while the president has ignored the impacts of climate change on South Florida.

State Sen. Bobby Powell, D-West Palm Beach, said Trump’s claims of environmental advocacy are “not only disingenuous, it's disrespectful. And it's downright preposterous.”

“This administration has continued to do things like disbanding the scientific review panel that advises the EPA about safe levels of pollution,” Powell said. “He has gutted the Department of Interior when it comes to saving lands and opened up a lot of land … 6 million acres of wetlands that would have been there to restore our environment, will now be open for potential development, further quickening climate change, further eroding our environment and making this planet less safe.”

Before his speech, Democrats said Trump’s words against offshore drilling are welcome, but his pledge against opening Florida waters to oil and gas exploration is likely good only until the end of the election cycle.

“He obviously knows it is a politically devastating issue to support drilling off of Florida,” said U.S. Rep. Lois Frankel, D-Fla.

“You cannot believe anything he says,” Frankel added during a Zoom conference call. “I think it's a good thing, we should not be drilling off the coast. I'd like him to say that he will not do it. … I think if he gets elected, he'll reverse his program or his pledge.”

Joe Bonfiglio, president of EDF Action, the political partner of the New York-based Environmental Defense Fund, said as recently as three months ago Trump’s administration was shopping an oil-industry plan to drill off Florida.

“Now, less than 60 days until the election, Trump has suddenly changed his tune, and announces that he wants to stop offshore drilling?” Bonfiglio said. “If he's re-elected, he'll go right back to doing what he’s always done —- anything big polluters want him to do.”

In June, Politico reported that the Trump administration was prepared to open Florida’s coast to oil and gas exploration but would wait until after the November election. The delay was calculated because Florida elected officials have been mostly unified the past several years in opposition to drilling off the state’s coast.

Supporters of drilling, including the petroleum industry, say domestic energy production creates jobs and is a national security issue. Trump has also often touted the need for national “energy dominance.”

“Extending the moratorium in the eastern Gulf of Mexico and expanding it to the South Atlantic is the wrong approach at the wrong time," Lem Smith, vice president of upstream policy at the American Petroleum Institute, said in a prepared statement Tuesday. "Offshore access is critical for growing U.S. energy leadership and providing affordable energy for American families for decades to come. A ban on responsible energy development in the eastern Gulf and the South Atlantic puts at risk hundreds of thousands of new jobs, U.S. energy security advancements and billions of dollars in critical revenue for states."

Before signing the order, Trump said he could take the action because of his administration’s pro-America energy policies.

“With fracking, the shale revolution and the tremendous surge in American energy production, we're showing that we can create jobs, safeguard the environment and keep energy prices low for America and low for our citizens,” Trump said.

Offshore drilling has long been a political lightning-rod issue in Florida, with many coastal businesspeople and residents opposed to it. The concerns have been raised since 2010 following the impact to the state from the Deepwater Horizon disaster.

“I hope that the Senate will now realize what the House of Representatives and President Trump realize —- that Florida needs to be protected from offshore drilling —- and act to convert this executive order into formal legislation like H.R. 205 so that it cannot be easily reversed by a future administration,” said U.S. Rep. Francis Rooney, a Florida Republican who introduced the resolution.

In 2018, then-U.S. Interior Secretary Ryan Zinke traveled to Tallahassee to announce that Florida would be exempt from Trump’s offshore drilling plans. However, Zinke’s statement was seen largely as a political favor to then-Gov. Rick Scott’s U.S. Senate campaign.

Later that year, nearly 70 percent of Florida voters approved a constitutional amendment that reinforced a ban on drilling in state waters off the coastlines.