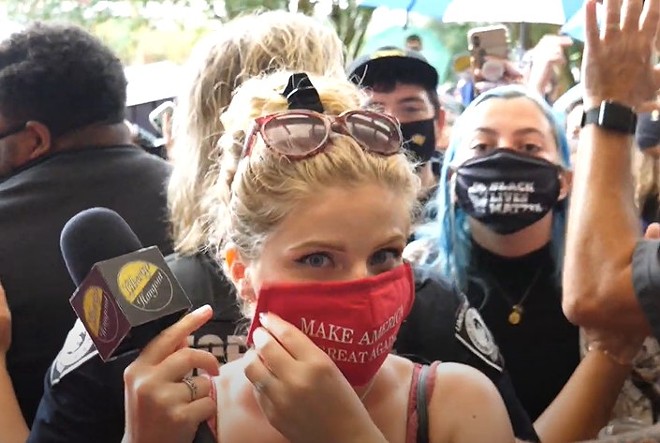 A visit to the UCF campus by conservative internet personality and gun rights activist Kaitlin Bennett turned into a full-blown student protest event on Thursday morning.

Bennett is best known for going viral in 2018 by posing with an AR-10 rifle at her college campus in her graduation pictures. The Kent State University grad then gained more internet popularity in 2019 when photos and rumors of her having shat herself while intoxicated at a frat party started circulating. She is also known for anti-Semitic tweets, as well as publicly making trans- and homophobic comments.

During an impromptu demonstration, a loud majority of UCF students made it clear they did not want Bennett on campus, but not for her far-right ideology. Students were furious to see Bennett not complying with the school’s strict face-covering policy.

“I’m 100 percent OK with free speech, what I’m not OK with is the fact that she can come on to campus and totally disregard the mask policy when we all have to abide by it, or we can’t even be on campus,” said Brooke Scarry, 21, a UCF student majoring in visual arts and emerging media management who took time to show up to protest Bennett.
Indeed, Bennett arrived at UCF and stood right outside the John C. Hitt Library for nearly two hours before finally complying with UCF PD directives to put on a mask.

Bennett says she was told she wouldn't have to wear a mask during her visit. This is something that further enraged students, as the new UCF COVID-19 Return to Campus policy and the UCF guidelines for visitors clearly state masks are mandatory right now, and both are being severely enforced on students every day.

Enrolled UCF student and activist Anthony Sulvinski showed up with other students carrying a large “Black Lives Matter” banner and a megaphone as soon as they heard Bennett was on campus.

“I totally respect her right to free speech, but on the same token, all of us protesters have the right to free speech as well,” Sulvinski said. “You can say whatever you want, but to assume that you’re not going to get criticized for it through the form of protest, well, that’s just unrealistic.”

Several students and UCF staff called UCF Police on Bennett for not adhering to the mask mandate, as the crowd outside the library continued to grow.

"Well, if they separate and get in no-more-than-12-person groups, I'll wear a mask," Bennett said to UCF police. tweet this
Major Scott Freeman of UCF PD can be heard on video asking Bennett to “be reasonable” and put on a mask, as Bennett tried to negotiate the orders with him, arguing that students weren’t following social distancing guidelines.

“Well, if they separate and get in no-more-than-12-person groups, I’ll wear a mask,” Bennett replied.

Bennett brought her own security team and stayed behind them for the entire duration of her visit, as the men held a perimeter around her that did not allow students to freely approach her.

The controversial guest, who had a mask with her all along, only complied after being told she would otherwise be trespassed by police. At that point, she resigned, saying she had brought a “very special mask” for the occasion. Then, in a clear attempt to further agitate protesters, she slipped on a red mask that read “Make America Great Again.”

Bennett also runs a far-right YouTube show called “Liberty Hangout,” in which she mainly visits college campuses and does random interviews with students on hot-button sociopolitical issues. She alleges she dropped in on students to ask who they were voting for in the upcoming general election, Joe Biden or Donald Trump, but the video she posted of her visit does not show her asking anyone this question.

Her infamous reputation for purposefully agitating people during her interviews precedes her. Freeman said Bennett’s presence was having a similar effect on campus by inciting the students, making it impossible for them to enforce social distancing policies on the crowd, so he asked Bennett to leave for the sake of order and peace.

Bennett and her team again refused to comply with that request and began strolling around campus. As protesters followed, tensions grew higher, causing a stir that resulted in an altercation when Bennett's security team physically assaulted UCF students.

Knight News, an independent journalism outlet that focuses on UCF news and got an exclusive interview with Bennett the next day, is awaiting bodycam footage from UCF PD to investigate how the violence got started. Bennett said students “Spartan kicked” her bodyguards and came at them with skateboards, but Sulvinski says that's not true.

“The aggressors were her bodyguards,” Sulvinski said. “Namely the one named Isaiah, who was the short guy in the red shirt, he swung first on someone. The guy in the black shirt took someone by the neck and threw him to the ground, and there’s video evidence of this. That was them, unprovoked, assaulting protesters. That was not OK, because I don’t think any of us wanted violence.”

Scarry agrees. She says Bennett’s team was only about six people, while UCF students numbered in the hundreds. In her opinion, if students intended to hurt Bennett, they would have.
“We’re a good group of students,” Scarry said. “Yes, we could have easily taken her, but why would we have done that? That wouldn’t shine a good light on us or our school. She’s painting herself as a victim when she wasn’t. She was never in any danger.”

Bennett’s security team hid Bennett from the crowd by rushing her inside an Einstein Bagels shop on campus. While in there, Bennett criticized UCF PD on Twitter, posting a #DefundUCF hashtag and saying the police did not do their jobs and just allowed the students to act “like terrorists.”

The store later had posters on their windows and tables that read, “Shit girl is not welcome on our campus.”

Sulvinski and Scarry both say UCF PD catered to Bennett by not enforcing mandates and trying to negotiate with her way too much. Though they understand it wasn’t an easy situation, they both said the police could have done better. On the flip side, Bennett says that UCF PD coddled the students and enabled their "terrorism."

One thing was agreed upon, neither side was happy with UCF PD's work.

UCF PD has since released two official statements, one explaining why Bennett and her team were asked to leave, and another laying down the steps they took to de-escalate the situation.

UCF College Republicans condemned the actions of students in an Instagram post, but the UCF institution admitted in their own official statement today that they could have and should have handled the situation better and that they are still assessing the chaotic events.

“We will do better following the university’s own protocols for addressing lack of compliance with standards that are in place for everyone’s health and safety,” the statement said. “Individuals who refuse to wear face coverings will be asked to leave or will be removed from campus. UCF is committed to responsible, open discussion, and we want all perspectives to be heard civilly and safely.”

Sulvinski says he was disappointed at UCF but proud to watch the students stand up against ideas of violence, bigotry and division.

“It wasn’t planned or anything,” he said. “Poopy pants gun girl showed up with her bigoted ideas and we decided to protest her out of nowhere to make her presence unwelcome. The rhetoric is discriminatory and hateful, and we’re going to take control of the situation and say ‘You need to leave because your opinions and your bigotry are falling on deaf ears, and we don’t accept what you’re saying here.’”