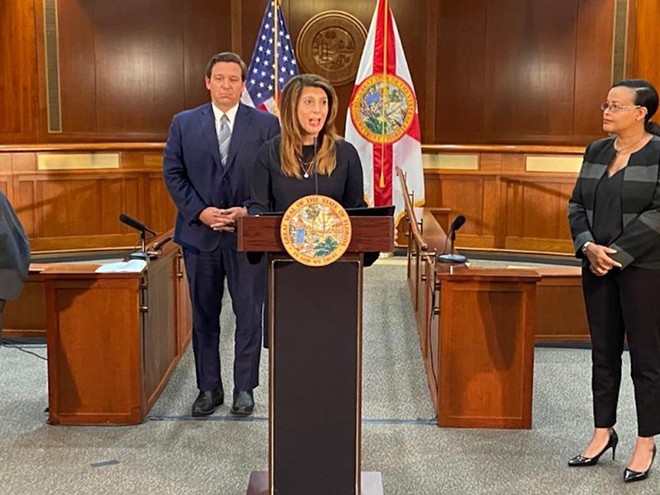 Averting a possible constitutional showdown, Gov. Ron DeSantis on Monday appointed Jamie Grosshans, a judge on the 5th District Court of Appeal, to serve on the Florida Supreme Court.

DeSantis’ appointment, announced at a 5 p.m. news conference, came hours after he defied a noon deadline mandated by the Supreme Court to name a justice. The Supreme Court set the deadline Friday after it rejected DeSantis’ pick of Palm Beach County Circuit Judge Renatha Francis because she did not meet a constitutional requirement of being a member of The Florida Bar for 10 years.

After DeSantis missed the noon deadline, the court gave the governor until 5 p.m. to fill the vacancy. The governor’s lawyers filed a notice of compliance with the court shortly before 5 p.m., when he appeared with Francis and Grosshans at the news conference at the Capitol.

Grosshans, who was appointed to the Central Florida appeals court in 2018 by then-Gov. Rick Scott after serving as an Orange County judge, will be the only woman on the seven-member Supreme Court.

“She understands the proper role of the court is to apply the law as it is written, apply the Constitution as it is written, not to legislate from the bench. I think she will bring that commitment to the Florida Supreme Court,” DeSantis said of Grosshans.

The appointment of Grosshans came after a legal battle over DeSantis’ choice of Francis that sparked accusations of “racial tokenism” and “hypocrisy.”

The Republican governor in May tapped Francis and Miami attorney John Couriel to fill two vacancies on the Supreme Court. Couriel joined the court immediately, but Francis was not slated to become a justice until Sept. 24, when she will meet the constitutional mandate that justices be members of The Florida Bar for at least 10 years.

State Rep. Geraldine Thompson, D-Windermere, filed a legal challenge to Francis’ appointment in July, with the Supreme Court agreeing that DeSantis overstepped his authority in choosing Francis. Ultimately, the court said DeSantis needed to choose another applicant from a list of candidates submitted in January by the Florida Supreme Court Judicial Nominating Commission —- a list that included Grosshans.

Grosshans is the Florida Supreme Court's fifth female justice. tweet this
Grosshans, a University of Mississippi Law School graduate, is DeSantis’ fifth appointment to the Supreme Court. Before becoming a judge she worked as an assistant state attorney in Orange County and ran her own law firm in Winter Garden.

DeSantis said Grosshans “will be an inspiration to a lot of working moms out there, to be able to raise three beautiful kids while maintaining a legal career.”

Grosshans, who will be the Supreme Court’s fifth female justice, said she stands on the “shoulders of champions” who fought for women’s voices to be heard. The last woman justice, Barbara Lagoa, was named in 2019 to the 11th U.S. Circuit Court of Appeals.

“I do not take this role lightly,” Grosshans said before quoting U.S. Supreme Court Justice Clarence Thomas. “The Constitution tasks the political branches, not the judiciary, with developing the laws that govern our society.”

Thompson, in a video conference with reporters Monday evening, called the governor’s selection of Grosshans “a victory for the Constitution.”

Thompson pointed out that Grosshans worked as a clerk in the Civil Rights Division of the U.S. Justice Department while in law school.

“She has familiarity with some of the injustices and the inequalities that we are faced with in today’s society,” Thompson said. “When we're looking at social unrest and people saying ‘Black Lives Matter,’ I believe she will bring some sensitivity to that court because of her work.”

While DeSantis ceded the court fight, he has not given up on Francis, who would have been the state’s first Jamaican-American justice and the only Black member of the court.

“I did not feel that she’d been treated very well by this process,” DeSantis said Monday.

The governor said he asked President Donald Trump, his close political ally, to consider Francis for an opening on a federal court in Florida.

“The president was very receptive to that,” DeSantis said. “That is actively under consideration. … Hopefully we’ll get some news on that at some point in the very near future.”

DeSantis announcement of Grosshans’ appointment put an end to a racially charged legal battle that will leave the Supreme Court without a Black justice for the foreseeable future.

The governor last week lashed out at Thompson, a 71-year-old retired educator who is Black and has participated in civil rights efforts.

"This particular representative is somebody that has been very vocal about wanting to have a Black justice on the Florida Supreme Court," DeSantis told reporters on Wednesday. "Guess what? The petition (the legal challenge) she has filed right now would prevent a Black justice. To me, that's the hypocrisy that so many people are sick and tired of."

Thompson, meanwhile, called it “absolutely insulting” that DeSantis’ sole selection for a Black justice was a candidate whom the Florida Supreme Court deemed ineligible for the post.

“It’s almost as if to say if you want color, you have to sacrifice qualifications. This is one of the worst and most egregious examples of racial tokenism that I have ever seen in my life. This is beneath the position of the governor of the state of Florida,” she said last week.