Biden's support among Hispanic Florida voters could be stronger, and community leaders are calling for action 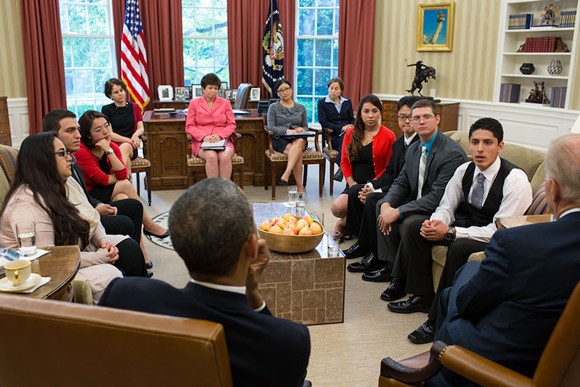 In a year of disease, unrest and chaos, the 2020 general election is being called the most important election of our lifetimes, and politicians are looking to gain favor with a new voice of participation at the polls.

The Latino vote is no doubt a coveted asset in this race. Hispanics currently make up over 18 percent of the U.S. general population, making them the largest minority and the fastest growing minority group in the country. In Florida alone, over 27 percent of our residents are Hispanic.

“Despite everything we are facing, I still have hope, but I would be lying if I didn’t recognize that this is one of the most difficult periods in this country’s history,” Fonsi said. “While I am confident that Joe will have our backs, I am also confident he needs us.”

Though recent polls show Biden leading among Hispanic Florida voters 58-32 percent, President Donald Trump has gained marginal favor with the demographic over the last four years. While Biden’s 26-point lead may seem comfortable, Democrats know it trails behind Hillary Clinton’s numbers in 2016. At this point in the 2016 election, Clinton led by 11 points more than Biden does now, but still lost the state.

Puerto Ricans make up over 1.2 million Florida residents, as the Sunshine State saw an influx of newcomers in 2018 and 2019 after Hurricane María devastated the island in 2017. In his speech, Biden said the pandemic has made clear how much "we rely on people with Hispanic roots to keep our country running."

"So many of our front-line workers are Hispanic," Biden said. "We don't just need to thank them, we need to pay them and treat them with dignity. [...] And to make sure we're giving Hispanic Americans the support and respect they need at all times we need to change our attitudes."

Biden has endured harsh criticism from opposition regarding his and Obama's administration's handling of the immigration issue. Obama is often mocked as the "Deporter in Chief," being accused of first "throwing children in cages" and deporting more immigrants than any other president.

But these claims are half-truths. While it is true that children were detained during the Obama administration, critics fail to contextualize that they were all unaccompanied minors and that detention centers were complying with a mandatory 72-hour holding period, in which the children would be turned over to the Department of Health and Human Services. HHS would then find them placement in shelters and homes.

The deportation numbers are also out of context. Deportation in the U.S. is divided into "returns" and "removals." Returns turn people away at the border, removals move them out of the country. While the Obama administration had a rise in returns, it had a lower removal count than the Bush administration, which had a lower count than Clinton's.

The Obama administration focused on returns to avoid an "open border" issue and focused its removals on new arrivals. The administration thought it more humane to send people away who had only been in American for a few days or weeks than people who had already been here for years.

For those who remained in the States, the Obama/Biden administration was unmovable in their efforts to establish both the Development, Relief and Education for Alien Minors (DREAM) Act and the Deferred Action on Childhood Arrivals, or DACA. The former would provide financial relief and support for education and citizenship, as well as a right to work to the children of immigrant families. DACA shielded younger immigrants brought here by their parents from deportation.

Before the event in Kissimmee, Rep. Carlos Guillermo Smith met with Martin and Fonsi at the Pulse Memorial in Orlando. The artists stopped there first to visit the site and pay their respects to the 49 mostly Hispanic and LGBTQ victims of one of the largest mass shootings in American history. A larger portion of the Hispanic victims were Puerto Rican.

Smith says that being able to elevate Biden’s message with high-profile celebrity endorsements is important and sends a powerful message. Especially with Martin, he says, who is politically engaged and beloved by his community, and was also present at the protests of the summer of 2019, when hundreds of thousands of Puerto Ricans occupied the streets of their capital for weeks to depose their ex-governor, Ricardo Rosselló.

“Puerto Rican voters are very distrustful of lying politicians like Trump. They are exhausted of the lies and the insults,” Smith said. “Last year they took to the streets to oust Rosselló – tired of the corruption, the criminal behavior, and the hypocrisy – and now they have the same opportunity to denounce Trump, to use their voice, and all they have to do is vote.”

Smith points out that for many Puerto Rican voters in Florida this will be their very first chance to cast their ballot in a presidential election. Puerto Rico, though an American territory, does not get presidential vote. However, once the American citizens who live there take residency in any one of the 50 states, they are immediately eligible to register.

“And I can see that they’re energized because for so many Boricuas who moved to Florida since the last presidential election, many after Hurricane María, this is the first chance they have ever had in their entire lives to vote for the President of the United States," Smith said. "For once, they have that power.”

Jerick Mediavilla, the representative’s husband, is one of those voters. The Puerto Rican educator and activist moved to Florida in November of 2016, shortly after the general election, and has lived here ever since.

While Biden’s 26-point lead among Florida Hispanic voters may seem comfortable, Democrats know it trails behind Hillary Clinton’s numbers in 2016. tweet this
In Puerto Rico, after turning 18, Mediavilla voted and participated all his life in local politics, but now at 38 he says he gets goosebumps at the mere thought of casting his ballot.

“We don’t have that (American) representation in Puerto Rico, so to me this is very moving,” Mediavilla said. “I feel like I am voting for the first time because I have never had this particular opportunity before. For the first time, I feel heard. I feel like people are actually listening to the Hispanic community.”

Echoing a sentiment expressed by actress Eva Longoria at the event, Mediavilla says increasing Hispanic participation in elections is not about helping Democrats or Republicans, it’s about preserving the truly representative process of American democracy, something he feels is in grave danger.

“Even if the result is not in our favor, the fact that people participated is what makes a democracy great,” Mediavilla said. “That’s what at stake here. We don’t want someone who echoes a dictatorship. We need someone who understands what he is doing and who he is working for.”

For Pulse survivor Brandon Wolf, the Biden presidency means that and a little more.

The media relations manager of Equality Florida served as guide for Martin and Fonsi during their visit at the Pulse Memorial site. Wolf, who lost close friends on the night of the shooting, says his worst fear after that experience was that people would forget. He says it's important to keep the dialogue going, as well as to keep minorities at the legislative table.

“It’s extremely important to hold events like the one we had on Tuesday, because what we’re missing in Donald Trump is a leader who understands the challenges that we face and even cares if we get through these struggles in one piece,” Wolf said. “That’s why Vice President Biden coming to visit Florida matters so much, because it reminds you of what’s possible when you have leaders who care.”

Wolf says four more years of Trump would not only mean a rollback on all the progress that the LGBTQ and Hispanic communities have struggled for decades to achieve, but also possibly losing the very foundation of our democracy.

“We are at risk,” Wolf said. “And the very first people to fall into the cross hairs when democracy falls apart, when we allow authoritarianism to rise, are marginalized people. All of the things we fought for are in danger of disappearing.”

Martin, who’s been an outspoken supporter on social media, often tweeting the hashtag #VoteBidenHarris, spoke at the event, saying that Biden is a man of character and unity.

“He believes his family and mine are more similar than different,” Martin said. “He believes everyone has a place in this country, no matter where you were born, what you look like, or who you love.”

The artist also said Biden is ready to protect Puerto Ricans everywhere and offer much-needed relief to the island.

“He’s ready to work for us,” Martin said. “A president who will respect the dignity of the Puerto Rican people. A president that has a plan to provide relief from unsustainable debt that is holding our economy back.”

Though Biden’s visit has been criticized by many on social and mainstream media as a desperate move or even pandering, Mediavilla says he doesn’t see it that way.

“If anything, I think this gesture underscores his commitment to recognize minorities,” Mediavilla said. “As much as other Republican leaders want to disenfranchise and dismiss our community, we are a 1.2-million-strong population of Puerto Ricans. We are a country within a state, and that is something the Biden campaign does not want to take for granted.”