Disney's Orlando theme park apps get new video content, and take on Quibi and BuzzFeed in the process

With Disney’s California parks still closed until further notice, and the Florida parks operating at a decreased capacity, many Disney fans are still unable to visit their favorite places. It looks like Disney is hoping a new update to its Disney resorts apps will help keep these fans under the spell of the pixie dust.

Fewer people in Disney parks means fewer people on Disney Parks-related apps. Disney has just added a slew of new features to address this. A new section in both the My Disney Experience app (for Walt Disney World) and the Disneyland app called “Disney Parks Daily” is being billed as an “all new hub filled with videos and articles - each one inspired by Disney Parks!”

Ten video series can be found in the new Disney Parks Daily section, though the Disneyland version has yet to publish the animal-focused Disney Parks Wild Sights series. Each "episode" is only a minute or so long, with a small progress bar on the top of the screen.

On-screen masks indicate that the Disney Parks Wild Sights videos were shot this year, though many of the other videos look to mostly use custom cartoon-like graphics and pre-existing b-roll of Disney Parks. Disney Parks Blog used the announcement of the new in-app video series to cross-promote the upcoming Magic of Disney’s Animal Kingdom television series that’s debuting on Disney+ September 25. The Wild Sights video also closes with a plug for the new Disney+ series. Disney does synergy better anyone, so similar promotions are likely to be seen in the future.


The videos are a mix between the Snapchat like Instagram Stories and Quibi, the mobile forward video streaming service launched by former Disney executive Jeffrey Katzenberg. Disney was an investor in the short-form streaming app that launched in April.

The article side of the new Disney Parks Daily section includes stories on Disney characters, listicles of in-park food treats, and DIY craft projects to try at home. Each article has a small note on how long it will take to read, with none being more than a 3-minute read. The article side of the Disney Parks Daily is a collection of various in-app content that began rolling out earlier this year.

According to an April blog post on the Disney Parks Blog, the apps will also see games and other content added. “From fun recipes inspired by Disney Parks foods and animated stories, to highlights from your favorite shows and parades, PhotoPass wallpapers and more, there are videos, games and fun facts on the way, bringing some Disney Parks magic to you.”

Disney Parks Daily seems to draw heavy inspiration from Oh My Disney; an official quiz filled pop culture Disney site that’s essentially Disney’s version of BuzzFeed circa 2010 (just before it went heavy into actual news). Despite still being active on social media, that site hasn't been updated in months and when you click on most of the recent stories they instead lead you to Disney's official news site. Oh My Disney is still home to hundreds of Disney themed quizzes and features its own line of Disney merchandise.

One criticism Disney has faced in recent years is its numerous apps, one for each resort with separate apps for in-park games and another for Disney merchandise. On the Google Play Store, Disney has nearly four dozen individual apps, including multiple video streaming services and one that’s sole purpose is to have Disney characters encourage kids to brush their teeth.

Disney already has nearly 50 different parks-related apps. tweet this
Even with nearly fifty different Disney mobile apps, countless content remains only accessible via an internet browser, including the Disney Parks Blog and Oh My Disney. The new Disney Parks Daily section looks to be an attempt to move some of this content, or at least original content drawn from these or similar Disney sites, into an existing Disney mobile app.

It does come as a bit of a surprise that Disney added the content to their existing Parks apps, as some have speculated that the upcoming AI-powered Disney Genie will be a separate app. When announcing Disney Genie, Walt Disney World Resort Manager of Communications, Avery Maehrer, declined to give details on if it will be integrated into My Disney Experience, instead stating, “We look forward to sharing more details on Disney Genie closer to its planned launch in late 2020, including how it will interact with the existing My Disney Experience and Play Disney Parks apps.” 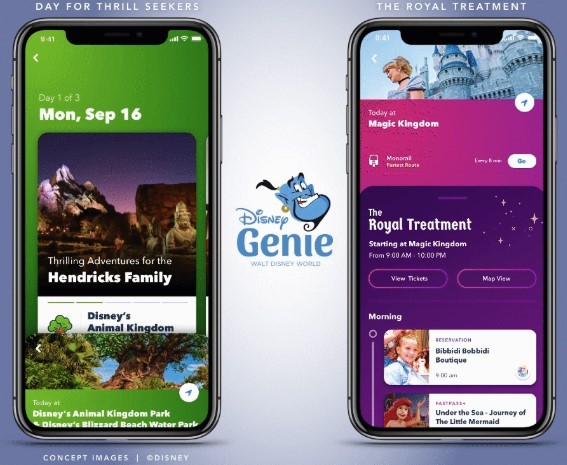 As Maehrer noted, Disney Genie was slated to roll out later this year, ahead of next year’s 50 Anniversary celebration. However, both the golden celebration and the Disney Genie app are now believed to be postponed until later next year.

It's also a surprising move considering how many issues the My Disney Experience app regularly has.

For now, there’s no telling if Disney plans to merge its now assumed dead in-house BuzzFeed knockoff with its new Disney Parks focused Quibi knockoff, or how it will affect Disney’s dozens of other apps. Still, the original content creates a Park app that shifts the focus, via a desirable video format, from at resort only use to instead being a way to connect with Disney fans no matter where they are. The move brings a coveted content format into an app already downloaded on the phones of many of Disney's most loyal fans. And while Quibi has been largely viewed as a failure (leading to speculation that it may now be up for sale), from TikTok to Instagram, short-form video is now a major entertainment format.

For Disney if this move from a purely in-park service app to a daily used lifestyle app works, it will likely far more significant than a handful of stock image-filled theme park videos.