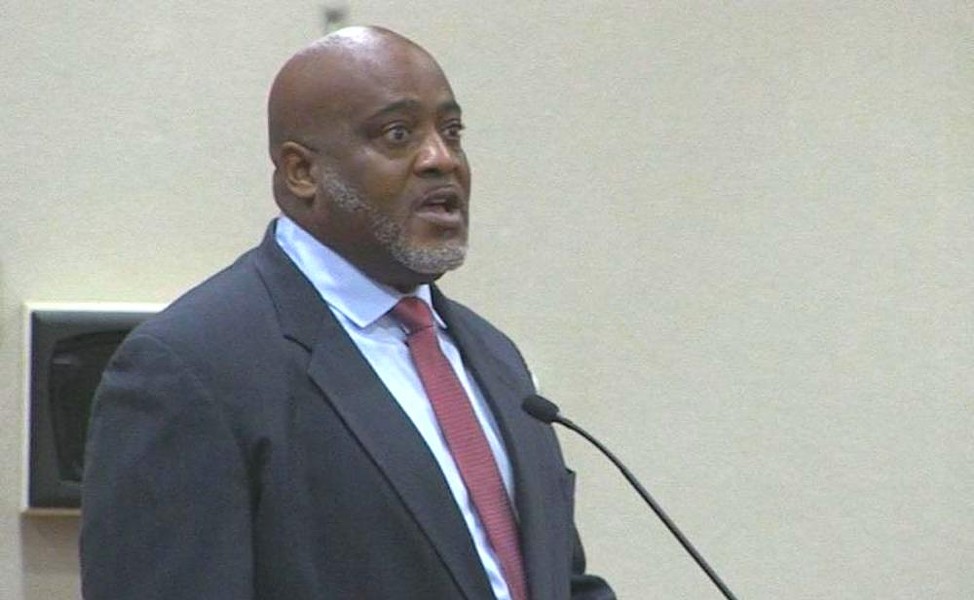 Desmond Meade graduated from law school, made it onto Time magazine’s list of the 100 most influential people and was at the forefront of a successful crusade to restore voting rights to convicted felons in Florida.

But the former drug dealer who was tossed out of the Army three decades ago hasn’t redeemed himself enough to be pardoned for his crimes by Gov. Ron DeSantis and Florida Chief Financial Officer Jimmy Patronis.

Accompanied by his wife and a daughter Wednesday, Meade told DeSantis, Patronis and the other members of the state Board of Executive Clemency, Attorney General Ashley Moody and Agriculture Commissioner Nikki Fried, that he has “emerged from a very dark place” to become “a beacon of hope and inspiration to so many people.”

But the stain still lingers from his years-long cocaine addiction, which he said led to crime, domestic violence against his ex-wife and a three-decade-old court martial that landed him in the brig and resulted in a dishonorable discharge from the military.

DeSantis and Patronis on Wednesday blocked Meade’s request for a pardon, with DeSantis saying the panel should take the issue “under advisement” until it can gather more information. Fried supported granting the pardon, while Moody recused herself.

Meade, executive director of the Florida Rights Restoration Coalition, has achieved international acclaim as an advocate for Amendment 4, a constitutional amendment that restored voting rights to felons “upon completion of all terms of sentence including probation and parole.” Nearly two-thirds of Florida voters approved the amendment in 2018.

The state’s labyrinthine and years-long clemency process prompted Meade and other advocates to initiate the constitutional amendment, which enabled Meade to cast a ballot in last month’s primary elections.

Desmond Meade graduated from law school, made it onto Time magazine’s list of the 100 most influential people and was at the forefront of the successful Amendment 4 push, but DeSantis wasn't satisfied. tweet this
DeSantis, a former Navy prosecutor, asked Meade why he didn’t try to clear up his military record prior to seeking a pardon from the state. Meade said his focus is on getting his rights restored in Florida, as a pardon would restore rights such as being able to serve on juries and have firearms.

“I see those instances of me doing wrong as a testament of what we can emerge from and what we can become in the future,” Meade, a Black 53-year-old man whose oval face and broad smile have become an iconic image of the push for felons’ voting rights, said. “No matter how low we can go, we can come back from that.”

Patronis questioned Meade about “some domestic violence in your background” involving his ex-wife and his brother.

“If they forgive you, heck, I can forgive you,” Patronis said. “But domestic violence is something that is a non-starter with me.”

Meade said his brother is dead. His wife, Sheena Meade, told Patronis that Meade’s ex-wife has supported his efforts on social media.

Fried, Florida’s only statewide elected Democrat, argued that Meade is the epitome of someone who deserves a pardon.

“What you have been able to do for the state of Florida, the fact that you got an amendment written into our Constitution has shown that you are somebody who is an exemplary citizen now that you have turned the page. I will absolutely be in support of your pardon,” she said.

But DeSantis, whose support is required for pardons or restorations of civil rights, said he wants to see more information.

“There is some information that I have asked about on the military side, and Jimmy has asked about that (domestic violence). So, I think that should be pretty easy to get that information. Then, obviously, we can do it from there,” the Republican governor said.

But Meade called his inability to receive a pardon emblematic of the state’s clemency process, which can take years to navigate and holds little chance of success for most applicants. As of August, the clemency board had a backlog of more than 24,000 cases, according to Fried’s office.

“It is very arbitrary. You can have someone who has not done half of the things that I have done since turning my life around that could get it. Then, someone like me would appear and you would think it is a no-brainer. There is no rhyme or reason,” Meade told reporters after the panel turned him down.

Meade and his wife asked DeSantis if the Orlando resident could have his civil rights restored, which would allow him to serve on juries and run for public office, but DeSantis said that wasn’t possible because Meade had applied for a pardon.

Critics have condemned the state’s clemency process as a remnant of Jim Crow-era laws designed to keep Black people from voting.

Under the process, felons who have not been convicted of murder, sex offenses or other violent crimes —- such as those resulting in death —- and who have completed their sentences, paid restitution and not committed any crimes for five years may apply to have their rights restored without hearings. Felons who have not paid restitution or who have been convicted of violent crimes must wait seven years.

Meade was seeking a full pardon, which “unconditionally releases a person from punishment and forgives guilt for any Florida convictions” and “restores to an applicant all of the rights of citizenship possessed by the person before his or her conviction, including the right to own, possess, or use firearms,” according to the Florida Commission on Offender Review website.

Since DeSantis and the current Cabinet took office in January 2019, the clemency board has restored the rights of 24 people with hearings. About 800 applications for restoration of rights without hearings, which have the support of Fried and Patronis are awaiting action by DeSantis, according to Fried’s office. No restoration of rights without a hearing have been granted thus far, her office said.

In comparison, former Gov. Rick Scott and the Cabinet approved about 3,000 rights-restoration applications over an eight-year period. The number is a stark contrast to more than 155,000 felons who had their rights restored under an “automatic” process initiated by Scott’s predecessor, former Gov. Charlie Crist.

After taking office in 2011, Scott and former Attorney General Pam Bondi pushed through a new process that imposed the five- and seven-year waiting periods.

Meade, who’s been the subject of profiles in People magazine and The New York Times Magazine, said Wednesday that DeSantis and the members of the panel could have sought more information if his application was problematic.

“What I have done since I committed my crimes is out there in the open. What more can I do?” Meade told reporters. “The state has employed a considerable amount of resources to thoroughly investigate. They have spoken to everybody who they need to speak to. I don’t see why there was a need for further consideration. Everything they should have known, they had ample time to have the answers to those questions.”

Minutes before DeSantis and Patronis turned down Meade, the panel approved a request for restoration of civil rights by Neil Volz, the deputy director of Meade’s organization.

The panel’s denial of Meade’s pardon “exemplifies the challenges we have in our clemency process and how we allow people to become restored, redeemed and contributing members of the community,” Volz told reporters.

“Desmond Meade is the ultimate contributing member of our community. He has helped restore 1.4 million people their eligibility to vote. He has been on Time magazine’s 100 Most Influential People, Floridian of the year. It’s been 20 years since there’s anything on his record. If that can’t allow you to serve on a jury in Florida, then there is something wrong and we should fix the system,” he said.