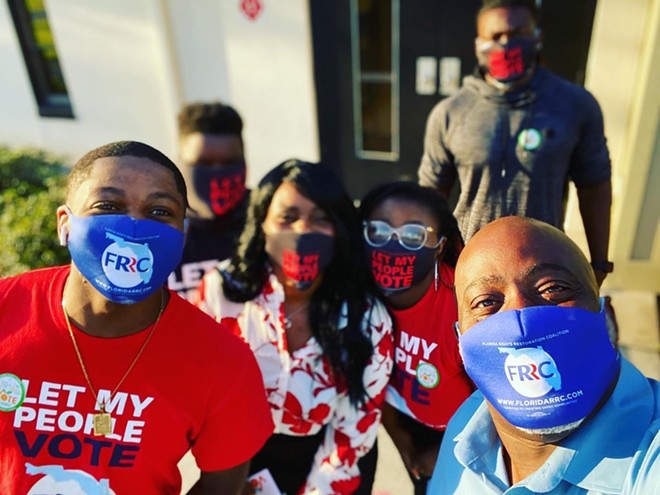 After his bid for a pardon was blocked Wednesday, Florida felons’ voting-rights leader Desmond Meade said the decision made him even more committed to continuing his work.

Meade, a former drug dealer who has garnered international accolades after leading the drive to pass a 2018 constitutional amendment to restore voting rights for felons, said he’s been waiting two decades to have his civil rights, which include the right to sit on juries and run for public office, restored.

“If a person with my record would have to wait, what does that say for everyone else?” said Meade, who has been able to register to vote thanks to the constitutional amendment, known as Amendment 4. “So my resolve is strengthened.”

Meade, who’s been clean and crime-free for more than a decade, appeared Wednesday before the state Board of Executive Clemency —- comprised of Gov. Ron DeSantis and the Florida Cabinet —- to seek a pardon.

But Chief Financial Officer Jimmy Patronis raised questions about domestic violence incidents in the past involving Meade’s ex-wife and brother.

Saying he was concerned about a military court martial that took place three decades ago, DeSantis, whose approval is required for pardons or rights restoration, told Meade the panel would take his request for a pardon “under advisement.”

Meade, who received a law degree from Florida International University, made Time magazine’s list of the 100 most influential people last year and has been profiled in major publications throughout the world.

"If a person with my record would have to wait, what does that say for everyone else?" tweet this
Speaking to reporters Wednesday afternoon, Meade said one of the reasons he sought a pardon was so that he could begin to practice law in Florida, something convicted felons are not allowed to do.

Meade’s group, the Florida Rights Restoration Coalition, has gathered more than $23 million to help felons pay “legal financial obligations” associated with their convictions, as required by a controversial law passed by Republican lawmakers and signed by DeSantis last year. The law was aimed at implementing the constitutional amendment.

The clemency board’s hesitation about Meade’s pardon has made him more determined to keep up the crusade to help as many “returning citizens” clear up their financial obligations and be able to vote.

“I walked out of that clemency hearing a little disappointed, but I would say more enthused and committed to continuing the work that we’re doing,” Meade said.

Meade, 53, pointed to the pause on his pardon request as “a perfect example of why Amendment 4 was started.”

Florida’s clemency process results in a “pure arbitrary decision with no standards whatsoever, which allows for politics and any other unnamed influences to play a role in whether or not an American citizen would be able to vote,” he said.

The decision to defer Meade’s pardon request came the same day he announced that he was receiving a $100,000 grant from an unidentified foundation for his advocacy. He said he’s going use up to $75,000 to match contributions to his group’s “Fines and Fees” fund.

The clemency board’s move also prompted state Sen. Annette Taddeo, D-Miami, to announce that she intends to file legislation that would require state attorneys and the Florida Department of Law Enforcement to disclose any fees or fines owed by people seeking to have their voting rights restored.

Taddeo’s proposal would give prosecutors and state law enforcement officials 30 days to respond to requests for the information and would vacate the financial obligations if the information isn’t disclosed. The 2019 law requiring felons to pay outstanding fines and fees could prevent hundreds of thousands of felons from registering to vote.

Fried also was among the critics of the clemency board’s decision Wednesday in Meade’s case.

She said the board has signed off on just 30 restoration-of-rights cases since DeSantis and the Cabinet members took office in 2019. There’s a backlog of 24,000 felons seeking rights restoration with or without hearings.

DeSantis also has not acted on more than 800 applications in which Patronis and Fried have given a thumbs-up, Fried said.

“If restoring and protecting Floridians’ constitutional rights were a priority for this governor, it would happen —- but it’s not, so it won’t. And that’s a damn shame,” she said.