Just as Florida Gov. Ron DeSantis forcibly ignores the pandemic that has crippled the state’s tourism industry, multiple new studies highlight the dangers of traveling during this period.

For the state’s hospitality industry, the current pandemic induced recession is the biggest hurdle it has faced since Sept. 11, 2001. With nearly 100 times more Americans killed from COVID-19, the lasting effects of the pandemic are far from over, no matter what DeSantis says.

In recent days, three separate peer-reviewed scientific studies have highlighted the role air travel played in creating super-spreader events in the early days of the pandemic. All three studies show probable cases of in-flight transmission. Numerous other flights have been identified as potential spreader locations, though a lack of traveler data from those flights means they will likely never be truly confirmed to be such.

One case, involving a 10-hour flight from London and Hanoi, traces a spreading event that eventually caused 60 percent of those in business class to test positive to COVID. Multiple members of the flight crew also tested positive. Altogether 16 confirmed flight-associated cases were able to be confirmed, all resulting from one sick passenger. It’s important to note that this study worked to identify any other potential exposure events, finding none.

The study also points to shared surfaces as a possible danger. “The role of fomites and on-board surfaces such as tray tables and surfaces in toilets remains unknown. For example, airline crew often use business class toilets while on board, which might explain the case among the crew serving in economy class, for whom no other potential source of infection could be established.”

Another smaller study, which only tested select passengers, also found multiple cases streaming from a single infected person. The confirmed cluster event on this Boston to Hong Kong flight was smaller, with only four persons involved, including two crew members.

"Air travel has played a central role in the progression of the COVID-19 pandemic." tweet this
Finally, a third recent study investigated 18 flights. Of the 891 passengers and crew members identified being within six feet of an infected passenger, they discovered five probable cases on in-flight transmission.

All three studies conclude that in-flight transmission is possible, and as the authors of the third study put it, “air travel has played a central role in the progression of the COVID-19 pandemic.” They continued, “Efforts should be placed in order to ensure the prompt implementation of appropriate infection control measures on board.”

Airlines have worked hard to ensure the public that it is safe to travel. Multiple airlines have installed hospital-grade HEPA filters, increased cleanliness standards, and have strongly enforced mask mandates. United and Hawaiian Airlines have begun offering passengers headed to Hawaii COVID tests before departure, helping meet visitor requirements for the isolated state. Other measures, such as blocking middle seats, are called “insufficient” in preventing super-spreading events. 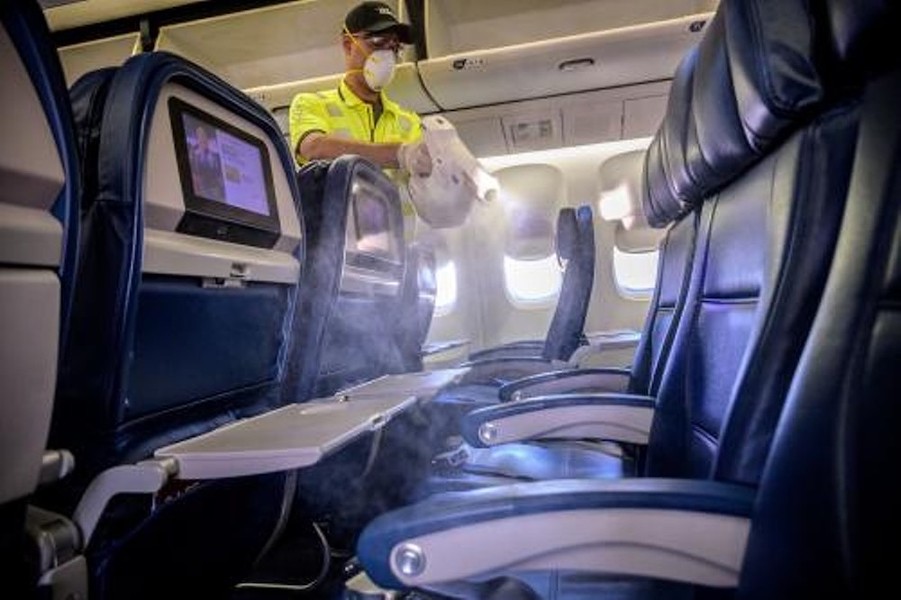 As is typical with peer-reviewed research, the results are a snapshot in time that may not be as relevant today. Of the twenty flights reviewed, none took place after mask mandates were put in place for airlines. The authors of the London to Hanoi flight study call mask mandates an “obvious and relatively simple measure.” Infectious disease doctors acknowledge that airlines have done a lot to slow the spread of the virus, with one going to safe as tweeting about his recent positive travel experience when he had to fly cross country to see his elderly mother.

Masks have proven to be an effective measure to slow the transmission of the virus, but, as they have done with other scientifically proven facts, the political right, most notably Gov. DeSantis, who have worked to undermine these efforts – going so far as blocking local municipalities from enforcing mask mandates.

Thankfully, most airlines seem to value the lives of their passengers and crew members more than Republican leaders in Tallahassee and D.C. For many Floridians, the best option might be getting on the next flight out of the state – just make sure to wear that mask while you're on the plane.