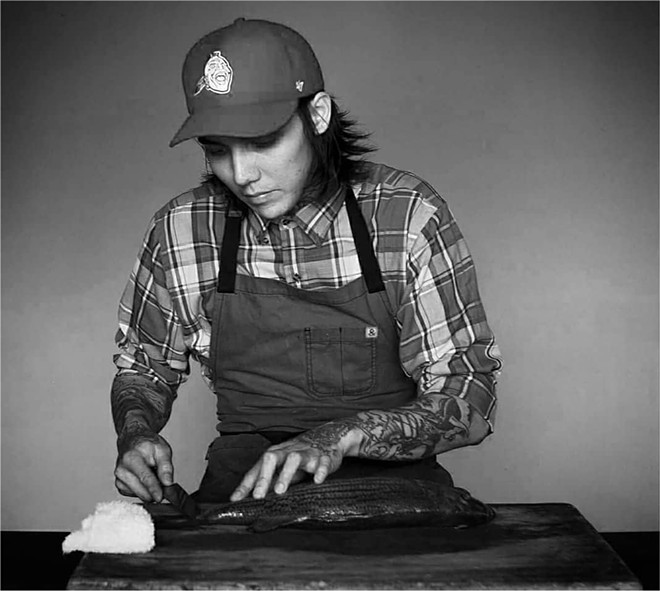 Mike Collantes, the classically trained chef behind Filipino-American eatery Taglish at the Lotte Plaza Market, is spreading his wings.

Collantes has formed the Taglish Collective, a restaurant group under which Soseki, a high-end, 10-seat omakase joint, will be its latest concept.

The restaurant is slated to open early next year at 955 W. Fairbanks Ave., next door to Vines & Forks at the Wine Barn.

Collantes is partnering with Denni Cha, whose Kaizen Izakaya bestowed Orlando with legit sushi and pan-Asian bites, to bring an intimate notion of omotenashi, Japanese for "hospitality," to Winter Park.

"We knew we never wanted to have a big restaurant," says Cha, whose Itamae Densho has been operating out of Swine & Sons these past few months. "To scale down the operation and have a personal connection to our guests can only happen with less seats."

Cha says the food will "draw heavily from our own cooking experiences and heritage while still leaving room for the spontaneity to cook with whatever ingredients that come into season and to work with specialty vendors locally and across the globe."

No doubt Soseki will draw inevitable comparisons to Kadence, the nine-seat omakase concept in Audubon Park but, says Collantes, he and Cha plan on expanding the scope to beyond just Japanese fare.

"We are not binding ourselves to just sushi or just Japanese techniques and products," says Collantes who's worked with such A-listers as Wolfgang Puck, Joël Robuchon, Eric Ripert and Masa Takayama.

"We plan to add elements of my past working for various styles of cuisine, and we really want to showcase Denni's skills as a sushi chef, his work in aging fish and vegetable fermentation and his Korean descent."

Collantes and Cha will stage Soseki preview dinners and a pop-up series of to-go lunch boxes out of the Emeril Lagasse Foundation Kitchen House & Culinary Garden, operated by the Edible Education Experience, in College Park next month.

"EEE is looking to further embrace our seed-to-table mission by expanding our current support of local chefs and farmers and having a more prominent role in the local culinary scene," they said in a statement. "It is our hope that this partnership can open the door to impact conversations and help educate Central Florida on seasonal eating, gain access to fresh produce and ingredients, bring farmers and chefs together, and build food confidence in the community."