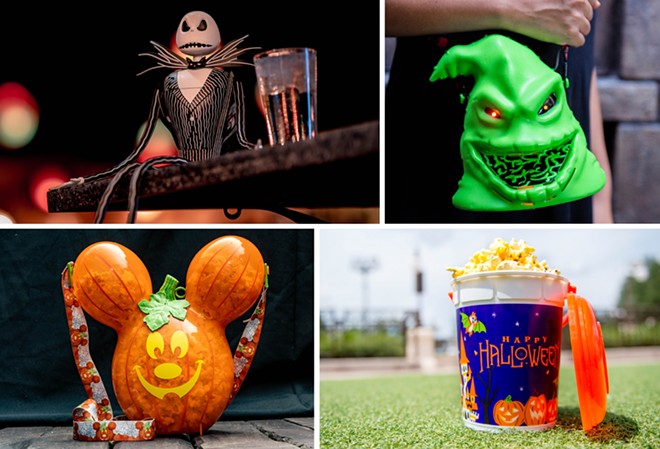 Even though events like Mickey’s Not So Scary and Halloween Horror Nights will go (mostly) uncelebrated this year, the recent chill in the air announces that Halloween is just around the corner. While special park events are limited this year, that hasn’t stopped Disney from rolling out an exceptional lineup of spooky-season snack items.

Magic Kingdom reigns supreme with 20 different food and beverage items, more than the other three parks combined. The Most Magical Place on Earth is also Disney World’s pumpkin spice headquarters, with waffles, milkshakes and soft serve all offered in the über-popular nutmeg-based flavor. A pumpkin spice milkshake found at Auntie Gravity’s Galactic Goodies is topped with a Mickey-shaped marshmallow straw.

For those who enjoy The Nightmare Before Christmas, the glow cubes can be paired (each sold separately) with a Jack Skellington Sipper that’s a perfect seasonal decoration for years to come, as is the Oogie Boogie popcorn bucket. And the Mickey-shaped pumpkin popcorn bucket could easily do double duty for trick-or-treaters.

Beyond the typical cupcakes and churros, Disney also offers some unique themed food items. For those seeking a distinctively sweet treat, Constance’s For Better or For Worse Wedding Cake at Liberty Square Market adds something blue to the season with a tiny handheld wedding cake comprising citrus cake with raspberry Bavarian cream and whipped cream flowers, topped with a chocolate ax. 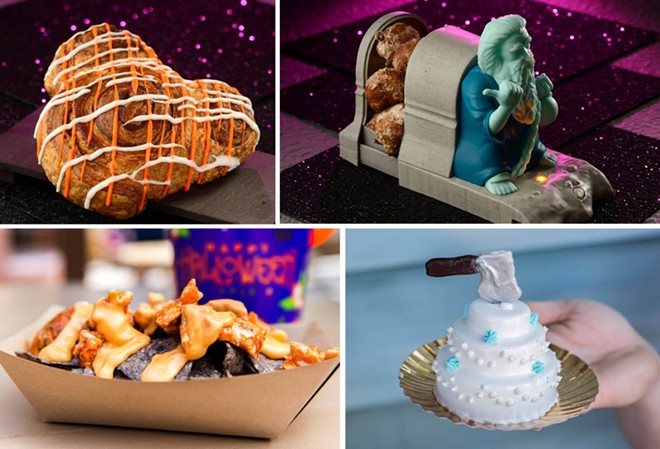 Epcot is home to the majority of Halloween Day exclusive food offerings, with four exclusive sweets to be offered only on Oct. 31. Typically, Disney also rolls out other special Halloween day offerings at the other parks with no formal announcement, though it is unclear if that will happen this year.

Animal Kingdom has a Scar cupcake and two specialty beverages, both with poison apple glow cubes. The cupcake is red velvet cake with toasted marshmallow filling and chocolate marshmallow frosting, topped with chocolate pebbles, white chocolate "flames" and an edible icing image of the antagonist from the Lion King film.

Spooky Apple Punch mixes Sprite with apple syrup over ice, garnished with a rock candy apple straw, a gummy worm and a Novelty Poison Apple Glow Cube, and served in a cup with a lime-sugar rim. It’s available at Flame Tree Barbecue and Isle of Java.

For the adults in the group, Flame Tree Barbecue also is home to a Rotten Apple Punch that combines Angry Orchard with Fireball Cinnamon Whisky, served on ice with gummy worms and a glow cube.

Hollywood Studios keeps it classic with apple cider (spiked with Crown Royal Regal Apple for those over 21). Both versions of the cider are served with a poison apple glow cube. 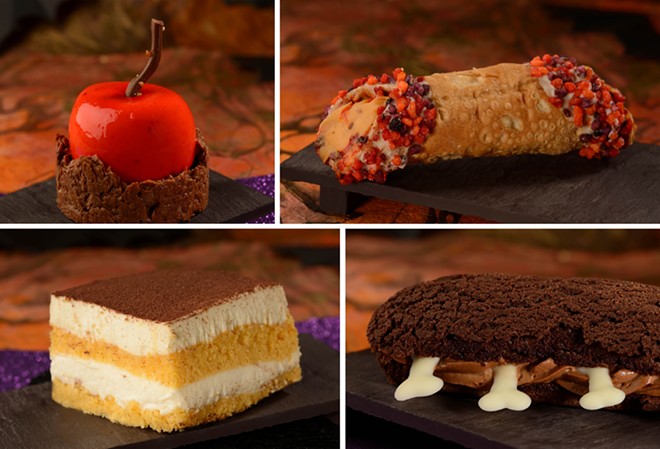 Pumpkin-flavored cheesecake cannoli, with a dash of hazelnut praline crunch, is available at PizzeRizzo. Over at Rosie’s All-American Café, guests can enjoy a pumpkin tiramisu. The Trolley Car Café (home of the park’s Starbucks) has a Poison Candied Apple that’s an apple and caramel mousse covered in "forbidden red" glaze sitting atop a crunchy candy base. Backlot Express is offering its own Box of Bones Chocolate Éclair with small white chocolate bones sticking out of it.

All of the specialty offerings are already available, except for the Halloween Day exclusive offerings – which are mostly limited to Epcot – but some of the specialty sippers and containers are already sold out. Larger than expected crowds the past few weeks have also resulted in some food stands selling out of select items throughout the day. Locations and more details on each of the seasonal food items can be found on the Disney Parks Blog.