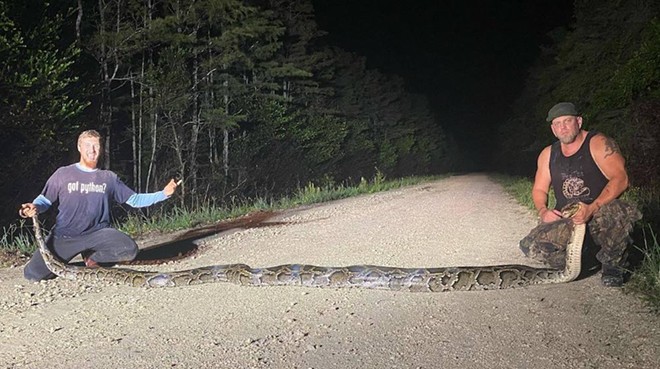 Last week, an 18.9-foot-long Burmese python was captured in the Everglades, setting a new state record.

The Florida Fish and Wildlife Conservation Commission confirmed the record Thursday afternoon on social media. “Members of our Python Action Team and the South Florida Water Management District Python Elimination Program captured an 18-foot, 9-inch Burmese python. That’s a new record!” wrote the FWC in a Facebook post. “Ryan Ausburn and Kevin Pavlidis caught the behemoth of a snake weighing a whopping 104 pounds. The removal of this female snake is a triumph for our native wildlife and habitats and a great example of the partnership between our two programs working toward our goal of removing nonnative pythons.”

The previous record for longest python found in Florida was 18.8 feet.

According to CBS Miami, the python was found on Friday, Oct. 2, about 35 miles west of Miami.

“Every python we catch can be potentially dangerous, but one this size? Lethal. One mistake, and I am for sure going to the hospital. But more importantly, this is a once-in-a-lifetime snake. I could go out every single night for the rest of my life and never see one this big again,” Pavlidis wrote on social media.

Burmese pythons are an invasive species credited with killing an abundance of Florida wildlife. One of the largest species in the world, Burmese pythons have almost zero natural predators and eat just about anything, including birds, mammals and even alligators, says the FWC. It is believed the snakes got to the Florida wild after being released or escaping from people who held them as pets.

“I am just incredibly grateful for this opportunity and an experience I will never forget,” Pavlidis wrote. “Realize what you have when you have it and cherish the experience in the moment. Be grateful, be respected, and be thankful.”