The highly anticipated Super Nintendo World was supposed to open this summer at Universal Studios Japan before being brought stateside in the coming years, but the pandemic and delay of the 2020 Olympics caused the opening to be pushed back to next year. Now the Osaka-based theme park will be debuting a unique café and retail experience to preview the upcoming land.

The store will offer T-shirts, throw pillows, keychains and other merchandise themed to the world’s most famous plumber duo. Notably missing from the retail offerings mentioned are the Power Up Bands that will be available for guests visiting the land. These MagicBand-style wristbands will allow guests to interact with the land in ways akin to video game characters, including hitting Question Blocks to collect virtual coins. 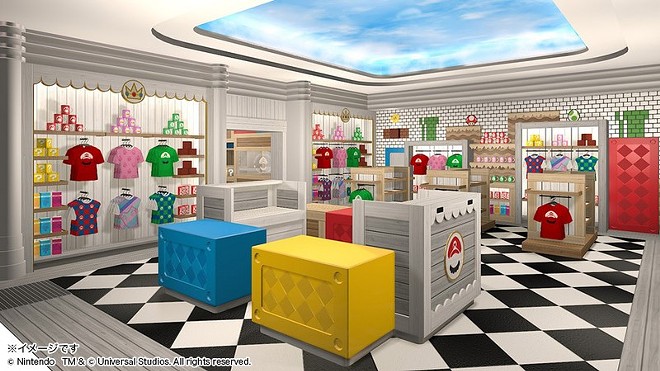 Overall, the store is similar to Universal Studios Florida’s Hello Kitty store, with a traditional store format overlaid with bold Mario touches, such as giant blocks near the registers and a tile mosaic that includes green pipes. The store replaces an existing retail location. The exterior facade, shaped like a camera, is mostly in place with a few small Mario touches, such as large red and green hats above the store’s two entrances.

Attached to the retail store will be a small café, replacing the Schwab’s Pharmacy ice cream shop. The café is far bolder in design, with faux grass flooring in a dining area filled with mushroom-shaped tables.

Two unique pancake sandwiches filled with cream and topped with fruits are the primary food offering we know thus far. The taiyaki-style pancake sandwiches are shaped like Mario and Luigi’s hats, flavored with strawberry shortcake or grape cheesecake. Mario, Luigi and Princess Peach each get their own novelty straw in a unique cream soda drink.

Super Mushroom sipper cups with a Super Nintendo World lanyard will also be available. On Universal Studios Japan’s website, it also mentions that soft drinks will be available. This is noteworthy as this is not the case in some other themed food venues, such as those within the Wizarding World.

Universal Studios Hollywood is wrapping up construction on its Super Nintendo World. Singapore’s version was put on hold earlier this year as the park there, part of Resorts World Sentosa, responds to the ongoing downturn in tourism related to the pandemic.

It’s unclear if any of the Universal lands other than Japan's will also have a Mario Café and Store. The move in Japan may have been related to warehouse space, with some of the items available in the café and store likely to have been planned as part of the grand opening celebration for the now delayed land. That same issue doesn’t exist at the other four resorts. However, Universal may replicate the concept at those resorts if the preview center is a success, either for Super Nintendo World or other upcoming attractions.