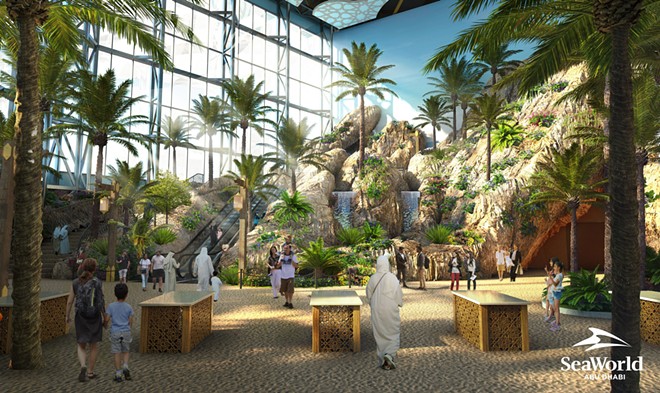 Even as the global travel industry works to recover from the massive pandemic related slowdown, some positive news was recently shared regarding one of SeaWorld’s most ambitious projects to date. Late last week, Miral announced that SeaWorld Abu Dhabi was 40% complete.

While SeaWorld’s U.S. operations have struggled over the past decade, the company has looked to expand its global footprint via strategic partnerships. Multiple parks and aquarium-based attractions were planned for China, but Chinese development firm Zhonghong, which was at one point SeaWorld’s largest shareholder, collapsed under a Chinese government crackdown on national firms shifting too many of their resources to foreign assets.

The collapse of Zhonghong allowed for another SeaWorld shareholder, Hill Path Capital, to acquire many of their SeaWorld shares, making the amusement industry-focused investment firm the current largest shareholder. Scott Ross, founder of Hill Path, has been chairman of the board of directors of SeaWorld Parks & Entertainment since July 2019.

Even as other international projects failed, the Yas Island park continued to move forward. Early concept art shows multiple buildings with a mixed indoor/outdoor-style park, similar to many of the parks in nearby Dubai. But the Warner Bros. park next door, along with Dubai’s IMG Worlds of Adventure, proved that an entirely indoor park could work. At nearly 2 million square feet, the new SeaWorld park will be one of the world's largest indoor theme parks.

While SeaWorld’s North American parks are leaning heavily into thrill rides to bring in guests, only one coaster can be seen under construction in Abu Dhabi. This isn’t surprising, considering just next door is the thrill ride-heavy Ferrari World park. That park is home to Formula Rossa, the world's fastest roller coaster. It will also soon open the long-delayed Mission Ferrari, the Dynamic Attractions designed SFX Coaster that is widely expected to become the world’s most advanced coaster when it finally opens.

Anchored by a massive aquarium that Miral is teasing as “one of the world’s largest and most progressive indoor aquariums,” the park will be broken into various lands based around the “One Ocean” concept that SeaWorld has used in its storytelling since 2014, when it debuted an orca show by the same name.

SeaWorld previously confirmed that this will be the first SeaWorld park not featuring orcas. The large killer whales have become a hot-button issue for the company following the widely viewed documentary Blackfish. No large sea mammals (including dolphins) are present in any concept art for the park.  Flamingos, sea turtles and tropical fish can all be seen in the Abu Dhabi concept art, and the building itself features the outline of rays and dugongs. Within the park, animal habitats will be designed to house multiple species together, replicating how they would live in the wild.

The park will also be home to the United Arab Emirates’ first dedicated marine research, rescue, rehabilitation and return center. SeaWorld Rescue seems to be a big focus of the new park – both rescued sea turtles and dugongs will be treated at the rescue center that is to be built alongside the new indoor theme park. In a prepared statement announcing the park's progress, Scott Ross pointed to these rescue efforts. “It’s a privilege to partner with Miral, a best-in-class organization, to build the first new SeaWorld park in over 30 years and the first park outside of North America. … We are thrilled SeaWorld will be a part of this special place, which will further expand our vitally important marine life research, rescue, conservation and education efforts in the region."

Miral released only one official piece of concept art, showing the inside of the main entrance into the park. Massive multilevel rockwork amid lush tropical landscaping greets guests. A pair of escalators cut into the rockwork are bringing guests down from a second level.

In a video announcing a visit by Mohamed Khalifa Al Mubarak, chairman of Miral, other unreleased concept art can also be seen. One piece, title “SeaWorld: Endless Ocean, Tank View,” shows a large multi-story aquarium visible through a Stargate-like circular entrance. Another drawing, titled “SeaWorld: Micro Ocean,” has a colorful aesthetic similar to SeaWorld San Diego’s Ocean Explorer kids area, home to the short-lived Submarine Quest indoor-outdoor dark ride. An area with flamingos grazing in a beachy habitat can be seen in what is titled “SeaWorld: Tropical Ocean.” Also seen is something that looks like a large waterfall, with a striking resemblance to the Rain Vortex found within Singapore’s Changi Airport. Viewing balconies can be seen circling the waterfall.

Many of the concepts seen in the Abu Dhabi park are similar to ones that were workshopped for SeaWorld’s Florida parks. Last month in a now-deleted portfolio blog post, Hetzel Design (who designed the iconic guitar-shaped Hard Rock Hotel in Hollywood) shared concept art for a massive SeaWorld Orlando overhaul that’s believed to be dated to former CEO Joel Manby’s tenure at the company. Similar to the Abu Dhabi park, the Hetzel concept art features significant amounts of rockwork and tropical landscaping. The blue-sky concept includes multiple long-rumored projects, such as a coaster replacing Wild Arctic, but one of the most interesting rides seen in the trove of concept art is a family submarine ride. For Abu Dhabi, which will have only a handful of rides, an attraction such as this could still be realized. 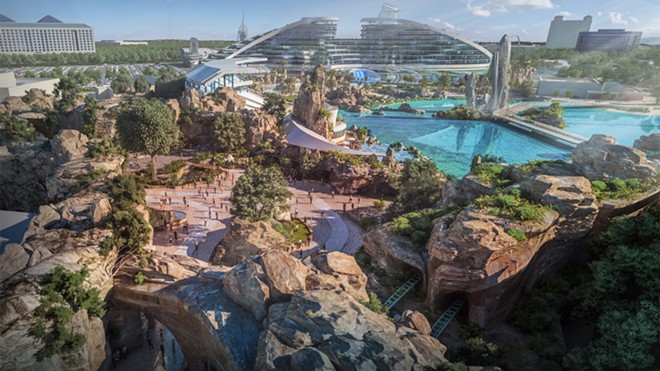 Even though the Hetzel concept for SeaWorld Orlando is long dead, some of the ideas from it could still be realized in Abu Dhabi, and if popular, may eventually be brought back to the stateside parks. This is similar to a move Disney often does, in which they open a new attraction at one of the Asian parks before bringing it to the States.

Like SeaWorld’s Abu Dhabi park, Disney doesn’t own their resort in Japan but has found success with the partnership. Tokyo Disneyland Resort is widely viewed as one of the best-managed theme park resorts in the world, with Tokyo DisneySea regularly ranking as the most beautiful theme park ever built. This success is surprising, considering this was Disney’s first international park. Since then, Disney has tried various ownership models with other parks in Asia and Europe, but none have seen Tokyo's success.

For the constantly struggling SeaWorld, they’re likely hoping the same can be true for their first international park. SeaWorld Abu Dhabi is scheduled to open in 2022.