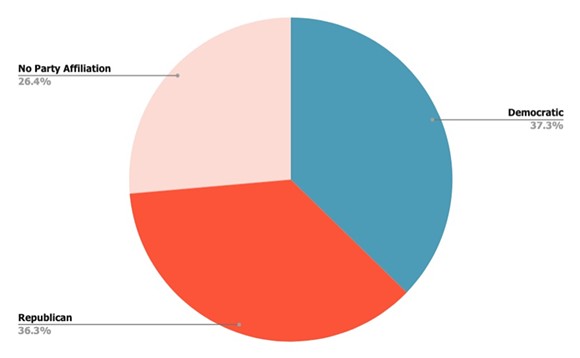 Republicans have narrowed the Democratic advantage in registered voters in Florida, as more than 14.4 million residents are eligible to cast ballots in the Nov. 3 elections, according to numbers posted Thursday by state elections officials.

“Democrats just can’t compete with that type of passion and Trump Victory’s superior ground game and infrastructure,” Vaughn added in a text.

“Democrats are leading in the metrics that will determine this election and returning their ballots at a higher rate than Republicans — and we aren't letting up,” Waibel said in an email.

Four years ago, Democrats accounted for 37.9 percent of the registered voters, while 35.4 percent were Republicans and 24.02 percent were independents.

In the new count, Democrats make up 36.7 percent of the voters, Republicans are at 35.8 percent and independents account for nearly 26 percent. The remainder are voters registered with third parties.

With Republicans overtaking Democrats in rural DeSoto County between the primaries and the general-election book closing, the GOP is the major party in 48 of the state’s 67 counties.

Meanwhile, Democrats lead in seven of the most populated counties, topped by Miami-Dade, which has 1.56 million total voters. Broward County has the next-largest amount at 1.266 million voters, and Palm Beach County is at 1.02 million.

Lafayette County in rural North Florida has the fewest registered voters, with 4,568, followed by Liberty County, which is west of Tallahassee, at 4,601. Lafayette has a Republican majority while Liberty County has more people registered as Democrats. Both counties voted overwhelmingly for Trump in 2016.

Nearly 2.1 million voters have already cast ballots by mail for the Nov. 3 elections. With the updated book-closing numbers, that means about 14.5 percent of the state’s registered voters have cast ballots.

Democrats had returned 49.9 percent of the vote-by-mail ballots as of Thursday morning, to 29.8 percent by Republicans.