Florida's medical board affirms law requiring written consent for pelvic exams (good), but they say it only applies to women (huh?) 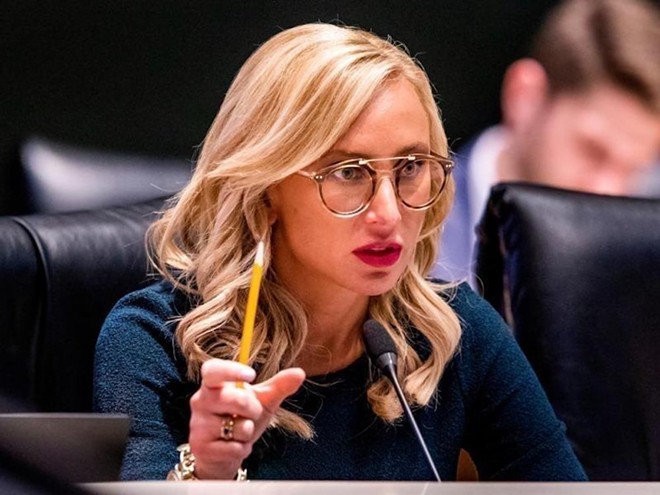 A new state law aimed at protecting patients from unwanted pelvic exams does not apply to people who are “biologically male,” according to a state medical board.

The Florida Board of Medicine, which regulates physicians, issued an eight-page order designed to clarify the law, which prohibits health-care practitioners and medical students from performing pelvic examinations on patients without written consent from the patients or the patients’ guardians.

The board noted in the order that the law’s wording “provides an extensive listing of female anatomical features such as the vagina, uterus and fallopian tubes but fails to mention a single male anatomical feature such as the penis, testicles or scrotum. Furthermore, the staff analyses from both legislative chambers clearly indicate that the term pelvic examination refers to a health-care procedure performed on biologically female patients to diagnose diseases and other conditions.”

Groups including the Florida Medical Association, the Florida Academy of Family Physicians and the Florida Chapter of the American Academy of Pediatrics asked the Board of Medicine this summer to weigh in on the law, which passed during the 2020 legislative session and was sparked by reports of women being subjected to exams when they were under anesthesia.

The groups said doctors were confused by the new requirements because of the law’s broadly written definition of pelvic exams to include “series of tasks that comprise an evaluation of the vagina, cervix, uterus, fallopian tubes, ovaries, rectum or external pelvic tissues or organs using any combination of modalities that may include, but not be limited to, the health care provider’s gloved hand or instrumentation.”

The inclusion of rectum, external pelvic tissues or organs broadened the standard medical definition of pelvic exam to one that could apply to men, the groups argued.


Written consent is required before pelvic exams with “gloved hand or instrumentation,” but *not* before visual exams or surgery. tweet this
State Sen. Lauren Book, a Plantation Democrat who championed the legislation, said Thursday she was pleased that the board issued a final order and that the end result is “not far afield of what we envisioned.”

But Book, who told the News Service of Florida this summer that she supported the consent requirement for male patients, said she was willing to revisit the issue next legislative session.

“Men should be able to provide consent as well,” she said.

The Board of Medicine order only applies to allopathic physicians. Petitions for declaratory statements also were filed with the Board of Osteopathic Medicine and the Board of Nursing.

The Board of Osteopathic Medicine has not issued an order, though it often aligns with the Board of Medicine on such issues. But saying the wording of the law is "clear on its face," the Board of Nursing issued two orders Thursday denying requests for clarification filed by nurses in July.

The Board of Medicine also opined in its order that written consent is not required before visual exams or prior to surgical procedures on the vagina, cervix, uterus, fallopian tubes, ovaries, rectum or external pelvic tissue, also questions the Florida Medical Association asked the board to address.

“Simply put, there is nothing in the legislation or the accompanying staff analyses indicating that routine non diagnostic medical care, treatments or surgical procedures involving the bill’s designated body parts were meant to constitute a ‘pelvic exam,’” the order said.

The Board of Medicine did not address two other issues the medical organizations wanted clarified: whether physicians have to obtain separate written informed consents each time a pelvic exam is performed during a course of treatment and whether informed consent is required if a patient is unconscious and no legal representative is not available.

Jacksonville health-care attorney and lobbyist Chris Nuland, who represents physician groups, said he will push lawmakers next legislative session to consider the issues the Board of Medicine didn’t address in the order, which was finalized last week.

“There’s still work to be done, and we look forward to working with Sen. Book on the remaining glitches,” Nuland said.