Disney may have canceled many of the big plans it had lined up for Walt Disney World’s 50th Anniversary, but that hasn’t stopped the resort – Florida’s largest single-site employer – from moving forward with many of its smaller plans for the golden anniversary. The biggest news so far for collectors and devotees of all things Mouse is that Disney has announced a specialty Florida license plate.

In car-centric Florida, specialty plates are a big deal, with drivers statewide able to choose from more than 1oo different designs benefiting everything from local environmental causes to cancer research.

Interested car owners can purchase a presale voucher for $25 plus state administration fees at County Tax Collector’s offices and DMV branches across the State of Florida. Online presales will be available soon.

This limited-edition license plate is a first for Walt Disney World. The proceeds from the annual use fee will benefit Make-A-Wish Central and Northern Florida.

The Make-A-Wish Foundation helps grant the wishes of children with critical illnesses. The foundation works closely with other groups, such as Give Kids the World Village, to help critically ill children and their families visit Disney World in the most stress-free way possible.

Since 1980, Disney has worked with Make-A-Wish to grant more than 140,000 wishes, including more than 8,000 that have taken place at Walt Disney World.

Specialty plates must sell at least 1,000 vouchers prior to production, though that likely won’t be a problem for this coveted collectible. This could provide Make-A-Wish a significant donation boost. One of the most popular specialty plates ever, the “Helping Sea Turtles Survive” plate, has brought in millions of dollars.

The WDW 50th Anniversary license plate design hasn’t been revealed yet, but Disney’s announcement regarding the upcoming release featured an image of the 50th Anniversary rose gold-inspired logo. This same blue and rose gold color is now being added to the Magic Kingdom’s ticket booth, and Cinderella’s Castle recently received a paint job featuring the colors. 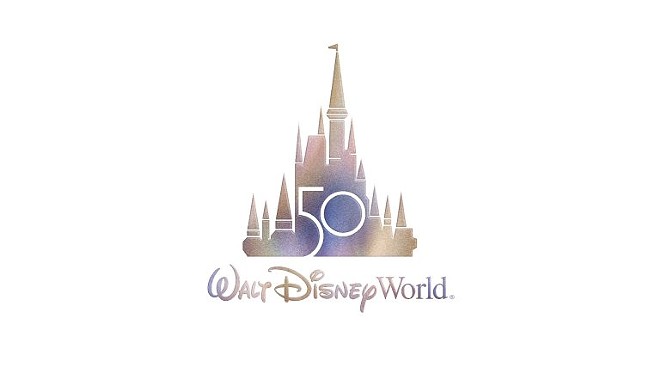 Early rumors pointed to big updates in the works for the anniversary celebration, but this year’s uncertainty has meant many of those plans have been put on pause.

Still, some new attractions will be available in time for the anniversary celebration, including the Tron Lightcycle Run motorcycle-style indoor-outdoor coaster at the Magic Kingdom, the trackless Ratatouille 3D dark ride at Epcot, and the 'Harmonious' nighttime spectacular, also at Epcot. A new nighttime show and possibly other entertainment offerings are also expected to be announced for the Magic Kingdom.

Early indications were that Disney planned to launch the 50th Anniversary celebrations in early summer 2021 but, amid the ongoing economic recession and coronavirus pandemic, it may instead begin on the actual anniversary date of Oct. 1, 2021, then run through late 2022. This would also mean the specialty plate could be released just before or during the actual anniversary events.