Wolfgang Puck Express is closed at Disney Springs, and the company is cagy on when and whether it will reopen 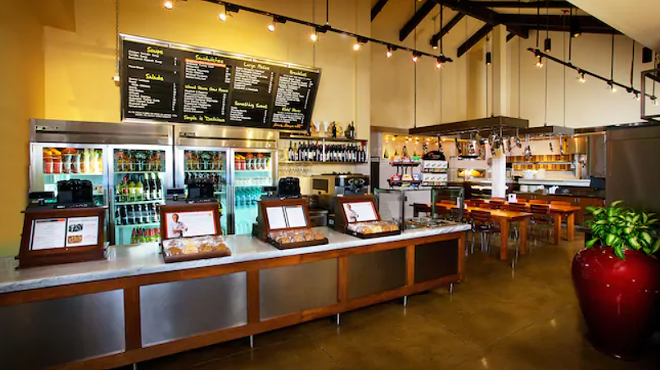 The Wolfgang Puck Express found within the Marketplace section of Disney Springs is reported to have permanently closed, though representatives of the restaurant say it's temporary.

According to reports on social media, Marketplace guests have been told the closure is permanent. Signage on the building has been removed, and dark drapes now cover all windows looking into the café. On the Disney Springs website, the café is still listed as “Temporarily Unavailable,” but it has been removed from the Weekdays at Disney Springs dining program.

In a statement to Orlando Weekly, a spokesperson for Wolfgang Puck Fine Dining Group denied that the closure was permanent, stating multiple times that, as of now, it is only a temporary closure. This conflicts with previous statements representatives from the company made to at least one other local media outlet.

The Wolfgang Puck Express has been a staple of the Marketplace section of the Disney Springs since the turn of this century, making it one of the first fast-casual concepts at what was then known as Downtown Disney.

Crowds have begun returning to Disney Springs, and with them, more businesses are reopening; still, some businesses haven’t been able to hang on. The Pearl Factory and the Void both permanently closed after "temporary" pandemic-induced closures earlier this year. The Void had a licensing agreement breach regarding the Downtown Disney location in California, though it's unclear if this affected the Disney Springs closure. Meanwhile, the Cirque du Soleil show that was to debut this spring has been postponed indefinitely, and the nearby NBA Experience has laid off all staff. It’s still unknown if it will reopen once social distancing guidelines can be relaxed.

The economic recession brought on by the pandemic and the inadequate government response to it has caused one of the worst downturns in Florida's tourism history. But in recent weeks, there seem to be some positive indicators – many potential travelers plan trips in the next six to 12 months to make up for the vacations skipped this summer. Meanwhile, progress is being made on finding a potential vaccine for the highly contagious coronavirus. This may mean the Orlando area could see a recovery far sooner than some had expected, though it's clear a full recovery won’t occur until at least mid-to-late 2021. For many businesses, especially low-profit margin restaurants, it may be cheaper to cut their losses now instead of trying to hang on until then.

The shift in response by Wolfgang Puck Fine Dining Group regarding the closure may point to an agreement between Disney and the company for the Disney Springs location. Landlords at retail centers across the nation have been working with tenants to help lessen the blow of the ongoing economic recession. Bankruptcies and closures have rocked the commercial real estate industry. Rent collections have improved, now hovering around 60% compared to just 25% in the spring, but with each closure, a shopping center’s ability to attract customers is lessened. It's possible that Disney Springs, seeing the negative press engendered by multiple closures, may have become more willing to work with tenants – especially one that has been a staple at the center for decades.