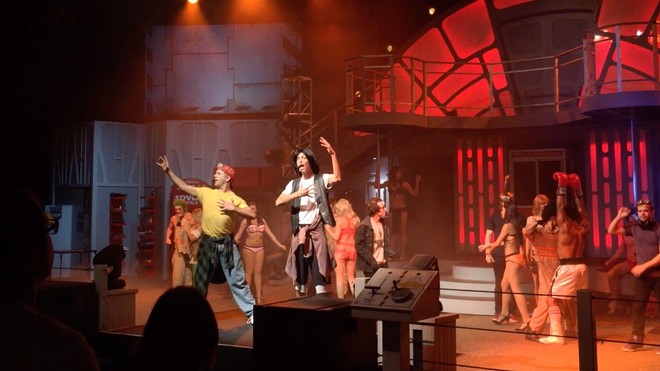 Unlike the many COVID-related casualties now dotting our entertainment landscape, the Bill and Ted’s Excellent Halloween Adventure show at Universal Orlando's Halloween Horror Nights had the honor of being retired voluntarily three years ago. Over the preceding quarter-century, the show had garnered a devoted following for its fast-paced and outrageous offering of sketch comedy, stunts, dance routines and ripped-from-the-headlines cultural references. (When “Monica Lewinsky” appeared on stage in her semen-stained dress during one of the late-’90s shows, you knew you weren’t at Mickey’s Not-so-Scary Halloween Party.)

The ever-changing revue also hosted a near-multitude of Orlando acting luminaries over the years, and many of them will be on hand for a virtual reunion this Thursday night, Oct. 22, on YouTube. Presented by Attractions magazine, the event will be co-hosted by veteran Orlando performer Jay T. Becker and Jason Surrell, a former writer-director for the Bill & Ted show who’s since become a kind of published Boswell of the theme-park industry. Guests will include Julie Zimmerman, creator of the Bill & Ted show, and many of the actors who played the title dudes and their rotating cast of supporting characters throughout the 1990s.

“At first it was going to be a private reunion just for ourselves, but then we thought it might be cool to get longtime HHN and Bill & Ted fans in on the fun,” Surrell says. “And then we decided to see if we could find a way to benefit the very kind of people who made these shows what they are, our local performing arts community.”

So the online event will solicit donations for Greater Orlando Performing Arts Relief (GOPAR), the recently formed organization that helps theatrical and attractions talent make ends meet during this most heinous of times. Now more than ever, the imperative is to be excellent to one another.