Central Florida’s tourism industry has struggled to turn up any good news since the coronavirus pandemic-related closures hit eight months ago, but one of the state’s largest resorts is showing hopeful signs with a massive overhaul to greet visitors slowly returning to the area.


The Orlando World Center Marriott was already the largest Marriott in the world, with a seemingly endless supply of recreational offerings. Previous additions saw water park-like additions to a pool area where nightly laser-light shows take place. That pool complex is ranked as one of the “world’s coolest hotel pools” by Forbes.

Now the 200-acre resort has brought its rooms, meeting spaces, and other amenities into that same “World Beyond Compare,” as the resort’s tagline boasts.

Like other local resorts, the Orlando World Center Marriott is looking forward to an eventual return to normalcy post-COVID, but has used the slowdown in reservations as a time to update its offerings. Now with all-new rooms and multiple remained spaces, the resort is ready to welcome visitors back.

“We have enjoyed welcoming back our loyal guests to see the fresh new look and attracting travelers who seek a modern Orlando vacation destination where they never have to leave the property,” explained General Manager Robert Bray. 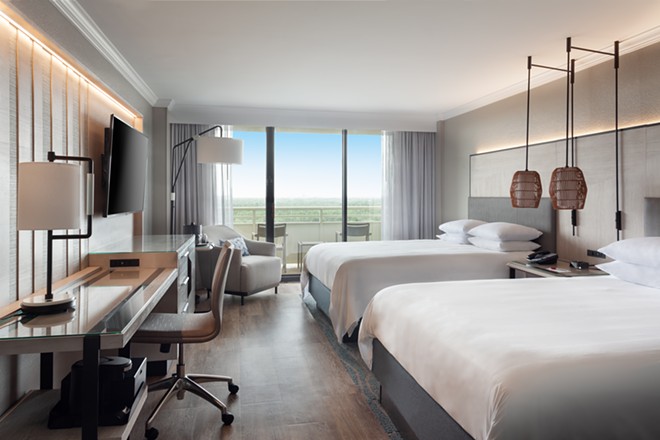 All 2,000+ rooms in the resort were updated. This is the first renovation for the guest rooms since 2008 and the first update to the suites since 2013. The refreshed rooms have a modern blue and gray color palette with warm wood touches throughout. Each room now has a 55-inch Smart TV, a mini-fridge, and all new furniture, draperies, linens, and décor.

All double/double beds have been replaced by queen/queen beds. Three-quarters of the rooms have also replaced their bathtubs with walk-in showers, which allow for easier access while providing a more contemporary look.

The Hospitality Suites were also given a dramatic overhaul. A one-bedroom suite now is augmented by two full bathrooms, a dining table, and a large balcony.

Already home to one of the largest convention centers in our region, a further 60,000 square feet was added, allowing for two dozen new meeting spaces. The meeting space addition cut into the resort’s award-winning Hawk’s Landing Golf Course. Three holes were completely rebuilt, including a new hole 204-yard, Par 3 island green #18. All bunkers and putting greens have also been renovated.

The open atrium-style lobby has been refreshed with an updated Lobby bar and a brand-new sushi bar. Guests can take in the sunset at two fire pits found on the lobby bar terrace.

While possibly being some years away from the coveted high-spending business travel returning, the resort is focusing on attracting locals and vacationers with various vacation packages. Unlimited golf and a package designed for those working remotely are both being heavily marketed. Staycation and extended-stay packages are also available, to add a hint of luxury to the "new normal."