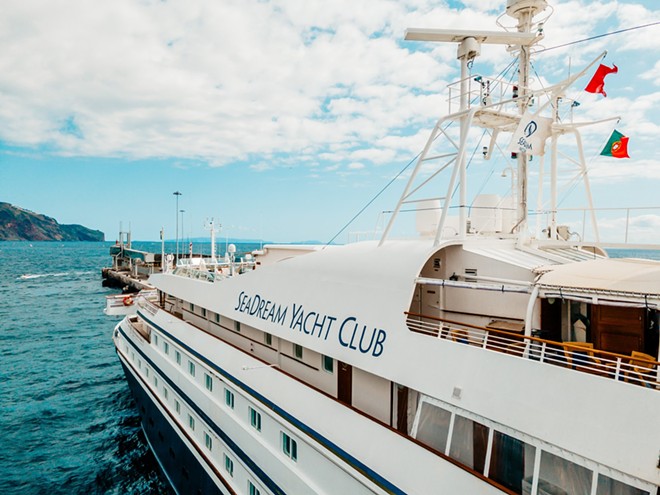 In what can only be seen as a major blow to the return of North America’s cruise industry, the first cruise in the Caribbean since March ended abruptly after multiple passengers tested positive for COVID-19, despite stringent safety protocols.

Just after noon on Wednesday, as many passengers were getting ready to enjoy lunch on the boutique SeaDream 1, Capt. Torbjørn Lund announced that a passenger onboard had tested positive for COVID-19 on a preliminary basis. The ship, racing back to Barbados, immediately went into lockdown mode. Passengers returned to their cabins, where they were confined for the rest of the trip. SeaDream 1 arrived in Barbados late Wednesday night, but the situation was just beginning to unfold.

Crew and Barbadian health authorities began testing everyone onboard, and by Thursday evening nearly 10% of the 53 passengers onboard had tested positive. The first five cases seem to have come from a single party onboard. Two other cases were a husband and wife who were staying in a cabin together. By Saturday afternoon, more than a half-dozen positive cases were linked to the ship.

Passengers and crew were quarantined onboard until Barbadian health authorities had multiple negative tests. From Wednesday evening to Saturday morning, the ship sat in port with passengers quarantined to their cabins, as health authorities and SeaDream’s onboard health center crew conducted tests. Passengers who tested negative were able to leave their cabins for one hour per day of socially distanced fresh air.

Just before disembarking on Saturday afternoon, two passengers spoke to Orlando Weekly regarding their experience onboard. Ben and David are a U.K.-based couple who run a cruise-focused YouTube channel, Cruise With Ben and David.

Like many cruise fanatics, they were eager to get back aboard a ship, which they viewed as one of the safest pandemic vacation options, but their Caribbean vacation quickly turned into something else.

“We have been in our cabin for three days now but are being treated very well, with three good meals a day – SeaDream have been very good. We've just done some work, watched movies and chilled out, but three days is enough without much fresh air! As soon as the positive test was announced, we made a 180 from Union Island in the Grenadines to Barbados at full speed.“

As with others in the industry, Ben and David were surprised an infected person could show up onboard. “We were very shocked with a positive test; after the rigorous pre-cruise actions we had to take, we would have thought it almost impossible for COVID to get on the ship. Before boarding, we were required to take a full COVID antigen test within the past 72 hours. On boarding day in Portsmouth, U.K., the ship's doctor gave us another rapid PCR test. We also had our oxygen levels and temperatures taken. Onboard there were daily temperature checks along with lots of cleaning and social distancing.”

SeaDream 1 didn’t enter U.S. waters and therefore didn’t need to meet CDC guidelines, though the cruise line had developed rigorous precautions that, in most ways, far exceeded even those now being required by the CDC. All passengers and crew were tested numerous times before and during the cruise. The ship had three Abbott ID Now testing machines on board. At first, the cruise line was not requiring masks, thanks to the strenuous onboard testing. It’s unclear if this played any role in the spreading of the virus onboard.

Unlike incidents in March where passengers were stuck on ships with the coronavirus rapidly spreading onboard, SeaDream Yacht Club worked with Barbadian authorities to quickly remove all passengers from the SeaDream 1.

While talking with Orlando Weekly, Ben and David were able to disembark after having two separate negative tests, including a full PCR test. They worried about what lay ahead as a taxi shuttled them immediately from the ship to the airport.

“The cruise was cut two days short; we are slightly concerned with flights and getting home. But hopefully with two negatives, we will fly home tonight. I think everyone onboard is just anxious to get back home.”

With the CDC requirements of multiple simulation cruises, health partnerships, and other expensive multi-step procedures, many cruise lines have opted for a wait-and-see approach. The SeaDream cruise was viewed by many as a pilot to see how cruising could return; the way it ended has some now questioning whether the CDC requirements go far enough.

In a public letter addressed to CDC director Robert Redfield, two Congress members urged the CDC to rescind efforts to allow cruising to restart. The letter, by Rep. Doris Matsui of California and Sen. Richard Blumenthal of Connecticut, pointed to the SeaDream incident as proof that cruising is still not a safe activity even the cruise line undertook numerous safety protocols.

“Despite these efforts and good intentions, the virus was still able to infect multiple people on the ship, with the possibility of more confirmed cases emerging as passengers and crew are retested. Unfortunately, this troubling development is not surprising and reaffirms the need to exercise extreme caution before sending passengers and crew back out to sea on cruises.”

At the same time, the lack of contact tracing makes it difficult to know if places such as amusement parks or public beaches are to blame for spreading events. Despite data showing restaurants and other hospitality businesses could be far more dangerous than cruises, having yet another cruise ship event in the news isn’t going to help an industry already ravaged by the virus.

Reflecting back on the cruise, Ben and David expressed concern regarding what lies ahead for the cruise industry. “SeaDream required double the number of tests that the CDC will require when cruising returns and it still got on board, so it begs the questions ‘what’s next for the cruise industry.’ Such a bittersweet moment after an amazing experience.” On Sunday the couple arrived home to Cambridge, England, where they’re now quarantining.