Could Rosemont provide an artsy blueprint to help fix Orlando's sprawl? One developer thinks so

The Orange County Commissioners heard more than a dozen concerned citizens express their disapproval of plans to add up to 200 new homes to the former Eastwood Golf Club. They voiced concerns over property values, flooding, and a lack of community features. In the end, the county commissioners agreed with the residents and blocked the development from moving forward.

Before the Orlando Municipal Planning Board (MPB) was another golf course redevelopment, and like the Eastwood one, numerous residents expressed their concerns over the project. But, unlike the one in east Orange County, the one before the MPB was approved unanimously.

The RoseArts District calls for redoing the 128-acre former Lake Orlando Golf Club into an artistic enclave nestled between Pine Hills and College Park. RoseArts developer Jakub Hejl is looking to add a downtown-like village center to Rosemont, a master-planned community that the original developer proclaimed to be “a new town within Orlando.” The original plans could move beyond the auto-centric design that has defined American suburbs for the past 60 years.

Hejl’s Miami-based Westside Capital Group has made numerous inroads into Central Florida with multiple acquisitions, including MetroWest’s The Residences at Veranda Park and Winter Haven’s Lakeshore Club. RoseArts, though, presents something different for the developer.

In presenting their recommendation to approve the project, city of Orlando staff noted the Rosemont community is already home to a variety of housing styles, including an abundance of single-family homes. That’s why Hejl instead opted to include only multifamily units in the new development. This is in stark contrast to the strictly single-family home plan developers at the Eastwood site had proposed.

Ironically, some of the residents who spoke against the RoseArts plan expressed interest in single-family housing for the site instead. Hejl, appearing before the MPB in a custom RoseArts face mask, explained the large amount of existing housing stock in the immediate area would make this not economically feasible.

350,000 square feet of retail and other non-residential uses is also being proposed for the site, including the addition of a grocery store. Both the nearby Albertson's and Publix locations closed years ago, leaving Save A Lot and two small bodega style retailers as the only nearby grocery store options.


Broken across multiple phases, the development will begin with Phase One along Rosamond Drive. This phase will see the addition of the primary village center and 1,600 residential units nestled around a reworked pond. This will also be home to one of the urban core areas, where some of the retail will be located. 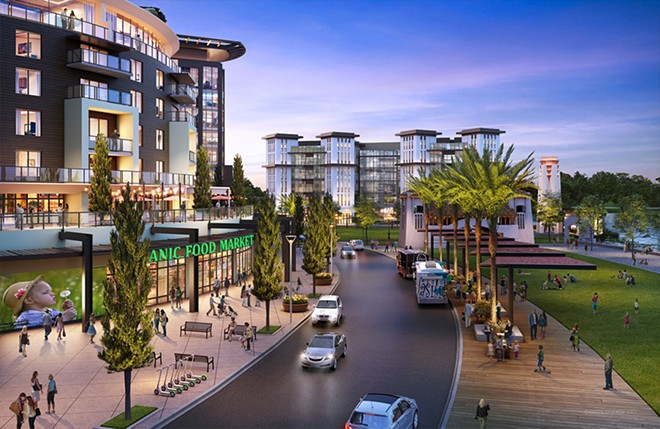 Roads will feature a multi-modal design that provides bikers with dedicated lanes. Paths throughout the site will link to existing nearby trails. The retail uses near Lake Orlando are designed to emulate those formerly found at the Lake Orlando Golf Club clubhouse. An internal shuttle system will link the site to a nearby Lynx SuperStop allowing resident single transfer access to Disney, Winter Park, downtown Orlando, and other high employment areas.

During meetings with the community, residents spoke of how they missed the clubhouse, which hosted many community events. There's hope that a restaurant will eventually be built near the former clubhouse to once again allow the community to enjoy drinks while taking the Lake Orlando sunset and allow for residents to walk over for their Sunday brunch. During the MPB meeting, more than a dozen and a half residents spoke in favor of the project with many stating the walkability and the addition of nearby dining choices excited them.

The use of taller multi-story buildings also helps ensure more public green space — at least 25 acres are reserved for it.

In concept art shared by the developer’s team, large sculptural art pieces can be seen scattered throughout the city park-like green spaces. In speaking with Orlando Weekly, a representative for the developer explained RoseArts is designed with Hejl’s passion for art in mind.

The role of art won’t be reserved for just the public parks. Hejl envisions RoseArts becoming a place for artists themselves. The Lake Orlando clubhouse sits in what will be a later phase, but the representative for the developer confirmed to Orlando Weekly that they’re currently working with UCF’s Advanced Design Lab to help identify how the abandoned clubhouse could become an artist colony. Over 100 students are presently engaged in developing proposals on how to introduce the artist colony to the site. An annual RoseArts mural competition is also being proposed.

The project is designed to attract both local and international artists. The spokesperson stated, “[w]hile we expect to nurture local talent: entrepreneurs and artists, the RoseArts District will surely attract international talent. The vision of the RoseArts District is inclusive and aspirational. [It] will need a mix of both local and international talent, perspectives, and voices.” Some artists in the community are already looking into how they may be able to benefit from the project with, according to the developer's spokesperson, at least one  existing Rosemont artist already expressing interest in opening a jewelry store and gallery in the Phase One village.

At the beginning of this century, hundreds of new golf courses opened as people moved to booming Sunbelt cities. Now with declining interest in the sport, hundreds of courses are closing. In Florida, home to more than 1,200 golf courses, older courses are no match against the newer ones designed using the latest technology and preservation efforts. Since 2006, one in ten courses nationwide have closed with the contraction felt most significantly at value-priced courses, such as the former Lake Orlando Golf Club.

In Lake County, the former Mount Plymouth Golf Club, once a favorite for the likes of Al Capone, Babe Ruth, and Lucia Mida, closed in 2007. After sitting abandoned for nearly a decade, the site was rezoned to allow single-family homes. While still active, that project has yet to see any major progress. Seminole County’s former Winter Springs Golf Club was sold earlier this year, with the developer looking at placing a mixed-use development on the site. Nearby in Casselberry, the Deer Run course is now being reworked to add hundreds of new single-family homes. 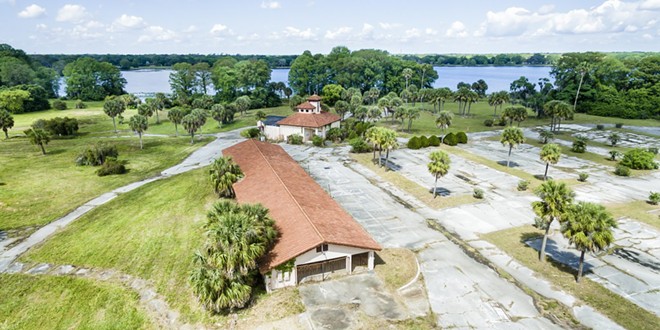 None of these projects seem to be as ambitious as what Hejl envisions for his site, located in one of Central Florida’s lowest-income areas. The Lake Orlando course sits in an Opportunity Zone, a federal program that encourages new investments in some of the nation’s most at-risk communities. Rosemont has more than 40 percent of residents living below the poverty line, higher than even that of nearby Pine Hills, with an annual per capita income of just $18,693.

An independent economic study commissioned by Hejl found the RoseArts District could generate 3,100 new permanent jobs earning nearly $115 million in wages while providing the City $4.29 million in net fiscal surplus annually. Like the redevelopment projects in east Orange County, Seminole County, and Lake County, residents near the RoseArts project expressed concern that it could hurt their property values, but the same economic study found “a reasonable expectation that redevelopment of the existing property will lift market values of surrounding property.”

The RoseArts District looks to address the flaws of 1970s urban planning while also helping to define one of Central Florida’s often overlooked communities by using the same design standards found in places like Lake Nona. The infill walkable mixed-use project isn’t the right option for every abandoned golf courses, but it looks to be a far better option than the ‘more of the same’ sprawl fueled proposals seen in places like Eastwood, Deer Run, and Mount Plymouth.