The year 2020 will go down in history for giving the most severe hit to the tourism industry in more than a generation. However, as layoffs and closures continue throughout the industry, new attractions are still being built. At Universal Orlando’s Islands of Adventure, the Jurassic World VelociCoaster is still moving forward with an expected opening in summer 2021.

In recent weeks, the coaster has been testing during park hours, giving guests the first glimpses of what to expect on Florida’s fastest and tallest launch coaster. Universal also recently unveiled the first official look at the ride vehicles for the new coaster.

“Designed for speed and engineered for the hunt, the coaster’s revolutionary ride vehicle will send riders twisting and soaring across 4,700 feet of track as they encounter near-misses, launches, 12 heart-pounding seconds of airtime and more — with just a lap bar restraint holding them in place,” says Universal in a press release focused on the coaster’s ride vehicles.

The sleek black and blue ride vehicles have working LED lights, racecar-like seats, and a dominating front end. Ride designer Gregory Hall shared the official photos on his Twitter account, where he engaged told fans the onboard lighting is "important to the story of the attraction." Hall went on to claim, "Every detail is there for a reason," an important statement considering the addition of InGen logos. In the Jurassic Park universe, InGen is the Hammond-based bioengineering start-up where Dr. Henry Wu works as the chief genetic engineer.

One unique aspect of the new coaster is its theme, linking it to the more recent Jurassic World films, rather than the Jurassic Park films theme of the rest of the land. In announcing the new coaster, Universal was clear that it drew its inspiration from the updated films.

“Jurassic World VelociCoaster will be the world’s first coaster based on the blockbuster franchise, and will feature an original story that expands upon the thrills, dinosaurs and environments fans have seen on the big screen. Guests will join the original cast of the films – Chris Pratt as Owen Grady, Bryce Dallas Howard as Claire Dearing and BD Wong as Dr. Henry Wu – as Jurassic World unveils the next evolution of its 'carnivore expansion': the VelociCoaster, where riders embark on a high-speed chase and feel the rush of the hunt while racing alongside a nimble Velociraptor pack.”

This has led to speculation that the rest of the land may eventually be rethemed. The Jurassic Park River Adventure style ride at Universal Studios Hollywood was updated last year to reflect the newer Jurassic World branding. A similar update to Orlando’s boat ride was rumored, though it's unclear if this is still happening due to cost-cutting across the company. 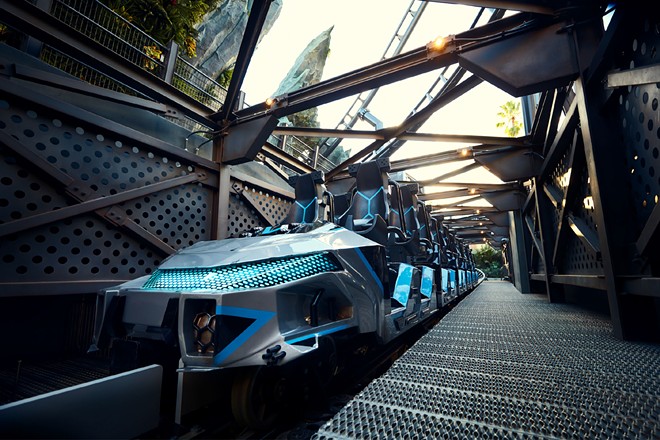 Manufactured by Intamin, the same manufacturer of the coaster used in Universal’s Hagrid’s Magical Creatures Motorbike Adventure, the VelociCoaster's track stretches more than 15 stories into the air, towering over the rest of the park, and provides the steepest drop of any coaster in Universal’s history.

The lap bar restraints, similar to the ones used on Rip Ride Rockit, offer more freedom for riders who feel less restricted by the unimposing bar. This will be especially exhilarating during a zero-gravity inverted stall where riders hang upside-down for a stretch longer than a basketball court. A second 360-degree barrel roll sends riders upside-down over the Islands of Adventure lagoon. Two launches will allow the coaster to reach a top speed of 70 mph, slightly faster than the nearby Incredible Hulk Coaster. Altogether the Jurassic World VelociCoaster has more than 4,700 feet of track and 12 seconds of airtime.

The first half of the ride features what coaster fans often refer to as a spaghetti bowl, a space-saving design in which the coaster crosses over itself multiple times, allowing for numerous coaster features tucked into a small area. VelociCoaster’s spaghetti bowl takes up roughly an acre and a half, where the Triceratops Discovery Trail was previously located. The lush landscaping throughout the site has been replaced by extensive rockwork and a raptor paddocks motif. Multiple lifelike velociraptors have been placed in the paddocks-themed section.

For now, Jurassic World and Jurassic Park will both share the land. Testing of the new coaster continues with unofficial soft openings expected sometime in spring 2021.