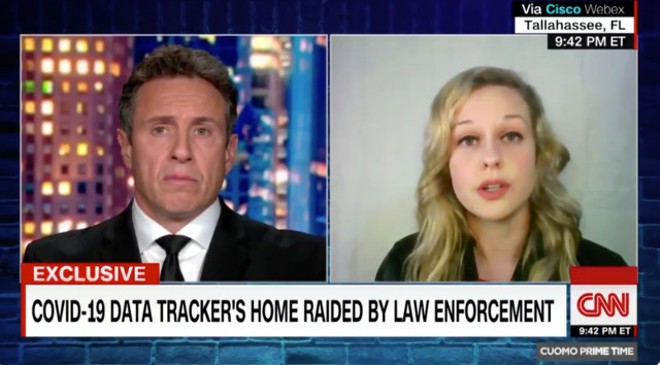 Rebekah Jones was fired earlier this year after complaining that Gov. Ron DeSantis’ administration was manipulating COVID-19 data to make the virus appear less prevalent as the governor pushed to reopen Florida’s economy.

Jones' Twitter post alerted followers that she would not have an update on a new COVID-19 website she established following her firing from the health agency in May, because state agents had seized her computer and phone.

The Florida Department of Law Enforcement confirmed Monday's raid in a prepared statement provided to The News Service of Florida.

The video posted by Jones shows officers brandishing guns and telling Jones to exit her Tallahassee home. The video also shows a law enforcement officer yelling at Jones’ husband to “come down the stairs now.”

Jones can be heard saying in a high-pitched voice, “He just pointed a gun at my children.”

Gov. "DeSantis needs to worry less about what I'm writing about and more about the people who are sick and dying... doing this to me will not stop me from reporting the data. Ever."
- FL data scientist Rebekah Jones on having her home raided as part of a cybercrime investigation. pic.twitter.com/ztbqdKjwYv

According to the statement provided by FDLE spokeswoman Gretl Plessinger, FDLE launched an investigation on Nov. 10 after receiving a complaint from the health department that someone at Jones’ residence illegally accessed a state emergency-alert messaging system.

In an attempt to “minimize disruption to the family,” Plessinger said that agents knocked on the door at Jones' home and called her phone.

“Ms. Jones refused to come to the door for 20 minutes and hung-up on agents. After several attempts and verbal notifications that law enforcement officers were there to serve a legal search warrant, Ms. Jones eventually came to the door and allowed agents to enter,” the statement said. “Ms. Jones' family was upstairs when agents made entry into the home.”

“If DeSantis thought pointing a gun in my face was a good way to get me to shut up, he's about to learn just how wrong he was,” she wrote.

Monday’s raid is the latest confrontation between Jones and the agency where she once worked.

Jones once served as the geographic information systems manager in the health department’s Division of Disease Control and Health Protection. She told Florida Today in May that she was fired for refusing to manipulate COVID-19 data.

The story made national headlines and top Florida Democrats called for an investigation.

But DeSantis downplayed Jones’ role in developing the health department’s COVID-19 online dashboard, saying she isn’t an epidemiologist and accusing her of insubordination.

The administration also brought to the media’s attention criminal charges that had been filed against Jones last year.

A review of Leon County court documents shows that Jones was charged in July 2019 with two counts of cyberstalking and one count of sexual cyber harassment. According to court records, one of the cases Jones is still open.

Jones filed a whistleblower complaint with the Florida Commission on Human Relations in July.