Less than a month after opening, authorities have now revoked the permit for Florida’s first snow park, Snowcat Ridge.

According to Snowcat Ridge’s Facebook page, Pasco County officials arrived at Snowcat Ridge on Wednesday, Dec. 9, and revoked the park’s existing permit “without providing any documentation or written explanation of any violations.”

The park also says the county has not recognized its State of Florida amusement ride approvals, and will not allow it to open the 60-foot tall, 400-feet long tubing attraction Snowy Slopes.

Creative Loafing Tampa Bay reached out to Pasco County officials who confirmed that the park was temporarily shut down for permit violations. "During several recent site visits, Fire Rescue and Building Construction Services discovered fire, building, electrical and plumbing violations that pose a significant threat to public health and safety," says a statement from the county.

"The park will remain closed until all life-safety violations are corrected." Based on the reporter from the county inspector, the park was jerry-rigged from peak to valley.

Some of the violations include un-permitted plumbing and electrical setups, exposed electrical boxes, extension cords and power wands sitting in puddles, and improper stacking and use of shipping containers, to name a few.

Pasco County became aware November 25 that Snowcat Ridge was operating in unsafe structures, without required permits, inspections or a certificate of occupancy. Although several permits have been pulled for the project since July, only one permit has been closed to date. The park has not requested any inspections for the other outstanding permits. 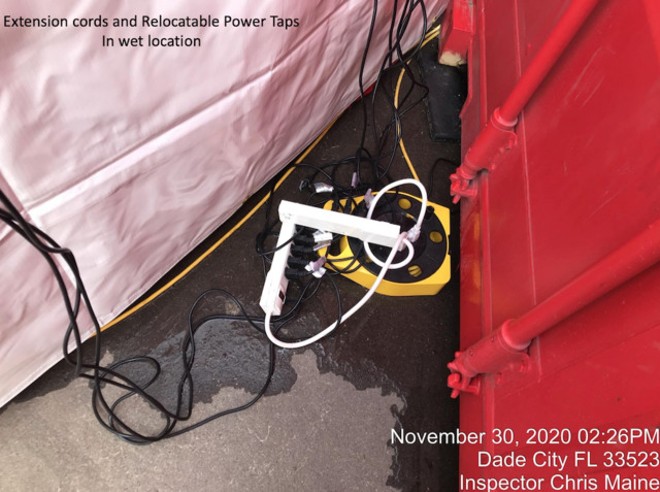 Angry guests sounded off in the post’s comment section, claiming that Snowcat Ridge knew they would be closed yesterday, but didn’t announce it until the next day.

“I’m glad we drove 2 hours only to get a text 15 minutes prior to arriving that it has been closed, ” said one guest. “If you all were canceled on december 9 why did you allow people to drive hours to get there today and then cancel them 30-40 minutes before there reservation time!!! SHAME ON YOU!!!! And then to tell people it will take 7-10 days!!!! HORRIBLE” said another.

It’s been a rough opening month for the Dade City snow park. Snowcat Ridge opened on Nov. 20 and had to temporarily close its Arctic Igloo attraction just four days later because it didn’t have enough snow to accommodate guests.

This is a developing story. We will update when new information comes in.


This story originally appeared on the website of our sister paper Creative Loafing Tampa.