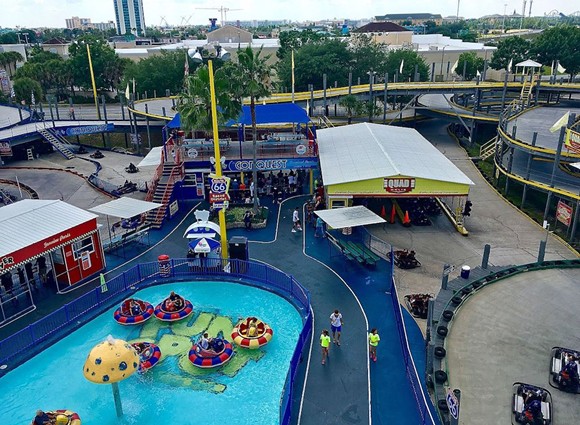 Despite the clear evidence that they work, masks have become a hot-button issue for some Americans who trust political discourse over science. Recently, that reality has been playing out in one of Orlando’s best-known local attractions. It was a full week after Walt Disney World began shutting down in an effort to stop the deadly spread of COVID-19 before Fun Spot did the same. Then, more than a month before Disney World reopened, Fun Spot welcomed back guests, with no masks required.

In emails provided to Orlando Weekly, Fun Spot founder John Arie downplayed the pandemic, which has now killed more than a million and a half people worldwide, comparing it a bad flu season.

Local ride developer Bill Kitchen shared with Orlando Weekly his email correspondence with the Aries starting on May 20, after the park announced it would be reopening, saying he felt it was "important to discuss with you the danger of opening any amusement ride that emerges the occupants in high speed airflow, especially roller coasters." Fun Spot on International Drive is built circling one of Kitchen’s best-known attractions, the Skycoaster, and Kitchen sold the Aries land that is now included in the Kissimmee Fun Spot.

In his initial email to John Arie, Kitchen continued:

"[An] expert in physics, aerodynamics or infectious disease would ask you to realize the danger in allowing the public to ride an attraction that would allow high speed airflow to travel between occupants, no matter whether the ride motion is circular or linear. Sterilizing the seats and hand-holds (or separating occupied seat rows) may be of no use whatsoever in protecting the public from infectious aerosols flowing into the face of the participants on the downwind side of an infected occupant."


Arie did not respond to Kitchen, but forwarded the email to his son, with a message saying in part, “I believe God has designed our bodies to heal and our immune systems to protect us as it has done for centuries. Our immune systems cannot develop and protect us if we are forced to 'stay in place' and quarantined.” He then asked his son to let him know “when you will be allowed to open.” Two days later, John Arie Jr., the current CEO of Fun Spot, reopened the parks.

Many of Arie's statements in that message to his son align with similar statements he has made on his personal Facebook account, where he regularly shares pro-Trump conspiracies and other far-right content. In one Facebook post that went viral in May, Arie Sr. discouraged mask-wearing, saying, "We don’t need hand sanitizer to live. We don’t need to stay 6 feet away from others," and "we don’t need government telling us what is 'essential.'" That post and his Facebook profile remain public, despite the backlash his anti-science/pro-Trump posts have received.

A few days later, an associate of Kitchen's visited the Orlando park and observed multiple people not adhering to safety protocols. Again, Kitchen reached out to the Aries, saying,

"On Saturday, we sent a photographer to your park to see and photograph your adherence (hopefully) to common sense safety measures for your guests.

What was seen and photographed alarmed and sickened me. ...

Do you really think that using alternating seats on a roller coaster will provide safety for the riders? I can demonstrate to you the problem in 10 minutes, if we place a harmless, visible aerosol dispenser near the head of a front row rider, and observe the flow of the particles into all the seats behind the front row, you will see a good demonstration of the problem. Would you be willing to do this tomorrow with impartial observers from the city, and IAAPA?"


“I appreciate your opinion but I cannot base our parks reopening off of anyone’s opinion besides our government and local officials. By the way, America has the best government that I can ever remember, some of the smartest people in the world, and the best scientist in the world. Fun Spot America Orlando has reopened under the guidelines from the federal, state, and local officials. We did not make the rules for reopening but we are complying by them. By the way, there are many other attractions in central Florida that are officially open or opening soon. I would like to ask you to please stop emailing us and allow us to operate our parks as safe, clean and fun as we possibly can under the USA government, State of Florida, Orange county, and the CDC guidelines.”


When reached by Orlando Weekly earlier this week, Kitchen confirmed he has continued to pressure Fun Spot to ensure guests at the park are safe. He pointed to Disney’s and Universal’s success with mask-wearing and physical distancing requirements, questioning why Fun Spot doesn’t have the same level of adherence.

In August, WFTV spoke to John Arie Jr. regarding the lack of mask compliance in his Orlando park. Junior blamed local officials, telling WFTV that it’s hard for his employees to enforce a mask ordinance when even law enforcement is not doing so, and saying "county health officials have not traced any cases of COVID-19 back to Fun Spot America."

Kitchen feels that Fun Spot’s poor enforcement is putting not only their own guests at risk, but also endangering the entire amusement industry. “I’m worried about the industry. If amusement parks become sites of super spreaders, if that happens, they won’t be visited, and many more businesses will be put out of business,” says Kitchen.

According to Kitchen, in their last interaction John Arie Sr. sent him an anti-mask conspiracy video similar to the ones he has shared on his Facebook account. Kitchen says he responded that the video was "garbage," and since then the Fun Spot founder hasn’t returned any of Kitchen's or his associates' contact attempts.

Kitchen has been raising the alarm regarding Fun Spot's lax safety enforcement for months, but it wasn’t widely noticed until last month, when Orlando tourism news website Theme Park Tribune shared Kitchen’s worries. Many of those concerns were posted in a press release he put out over the summer, before the pattern of ignoring mask compliance was documented by Orange County. Kitchen wants to work with local theme parks and health officials to research how the virus is spread on rides, but so far, no amusement operator has been willing to participate.

In recent weeks Fun Spot did pass an inspection by an Orange County enforcement team, but reports persist of a lack of COVID safety precautions.

For Kitchen, the county's move is encouraging, as it may mean more local businesses take COVID precautions more seriously. “I have other things to do, but I think not taking this seriously is dangerous,” said Kitchen. “There are plenty of cases where people gathering together spread COVID, and we need to stop that. Disney and Universal have done a good job at that. Why should Fun Spot be any different?”

*Due to an editing error, proper attribution to Theme Park Tribune was cut from an earlier version of this story. We deeply regret the oversight.