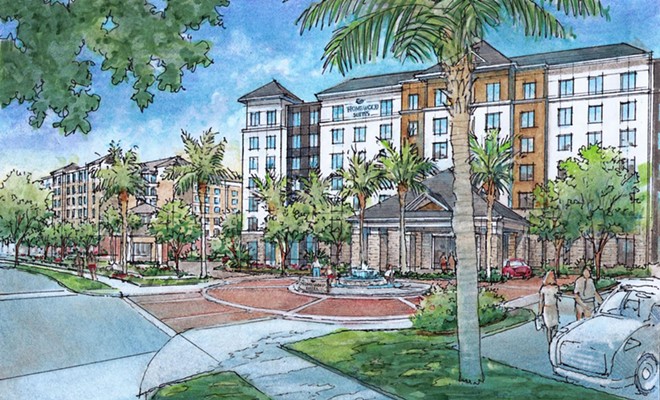 When Walt Disney World was first proposed in the late 1960s, the area around what is now Disney Springs was to be a mixed-use development with residences and offices within a short walk or PeopleMover ride of the commercial district. Just like its sister city, Bay Lake, where EPCOT was to be located, those plans were never realized. Instead, Lake Buena Vista became just another corner of the massive vacation resort.

In the early 1990s, the idea of a planned community in the shadow of the Vacation Kingdom was revived when the Celebration community opened on land in Osceola County that was once part of Disney World. A year after its opening, Orange County vowed to create its own Celebration-style communities and earmarked 23,000 acres on the west side of Disney World as what is still known as Horizon West.

New Urbanist design standards were used as inspiration for this sector plan, as they were in Celebration. Multiple neighborhoods were conceived for the area, with every two to four neighborhoods forming a village where commercial, educational, and office uses could be found. The entire project would be walkable, with bike trails and sidewalks on almost every road. Smart growth tactics would ensure large swaths of land would remain untouched and most residents would live within a short walk of a commercial district.

Since then, multiple developers have worked with the county to realize the plan. However, the county has frequently bent to these developers' demands, rather than staying true to the original vision. In the process, the walkability originally envisioned for the area has been nearly forgotten, and the town centers earmarked within the project have slowly evolved into traffic inducing suburban-style strip malls.

With the Disney-developed Crossroads Plaza, just east of Disney’s Lake Buena Vista, soon to be demolished to make way for improved interstate access, the Mouse looked at its western entrance to create a town center of its own. Despite its car-centric design, Flamingo Crossings is the closest thing to the original plans for Walt Disney World since at least Celebration.


Local favorites Persimmon Hollow Brewing Co., Ellie Lou’s Brews & BBQ, Gyu-Kaku Japanese BBQ and Bento Asian Kitchen + Sushi will be among the national chains in the retail complex. tweet this
The mixed-use development — announced in 2007 but just now being realized — will become the new budget-friendly shopping village for Disney visitors who are looking for an offsite value-oriented alternative. It will also be home to the Disney College Program housing when that program returns post-COVID. 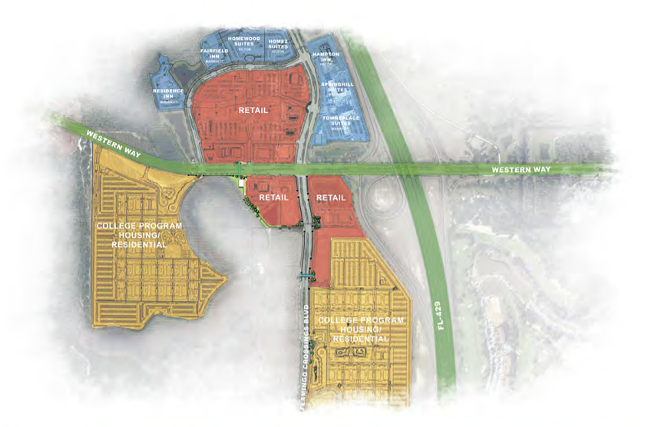 At full buildout, Flamingo Crossings will host 1,750 hotel rooms across seven hotels and nearly a quarter-million square feet of retail, and more than 10,000 college students will call it home. A gigantic Target will anchor one end of the retail section, found within the heart of the development and encircled by the hotels. The 200,000-square-foot retail center will also have dozens of smaller tenants, including numerous local small businesses.

Persimmon Hollow Brewing Co., known for its DeLand and downtown Orlando locations, will open their first Four Corners location within the complex. For those wanting some BBQ with their beer, Ocoee-based Ellie Lou’s Brews & BBQ might be a good choice. Other dining options within the complex will include Gyu-Kaku Japanese BBQ, PDQ Chicken, Bento Asian Kitchen + Sushi, Five Guys Burgers and Fries, Ben & Jerry’s, Dunkin, Wendy’s, Domino’s, Firehouse Subs and Pieology Pizzeria. Beyond the Target, other retailers confirmed for the complex include Five Below, the UPS Store and Walgreens.

While accessible for pedestrians, the area has the same parking lot moats that surround most shopping plazas in Central Florida, with little resemblance to the walkable town centers once envisioned for Horizon West, even as marketing material for the development notes that many of its 10,000 college student residents will not bring personal vehicles. Instead, the estimated 40,000 vehicles passing through the development each day are celebrated in bold letters and mentioned multiple times.

Many of the Flamingo Crossing hotels are already open, but the rest of the complex is planned to open in the next few years.