2020 highlights (and one lowlight) in the Orlando music scene 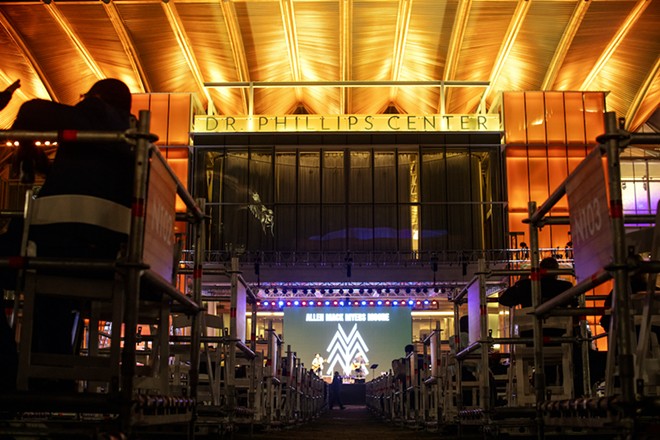 Fullest concert response to the pandemic: The Frontyard Festival
There’s been considerable hustle this year by the city’s live music venues to adapt to the times for safety and survival, but none have met the challenge with as much infrastructure and all-in commitment as the Dr. Phillips Center. By effectively turning itself inside out and becoming downtown’s own semi-permanent festival grounds of private boxes, the venue resumed its live programming on a grand scale out in its urban plaza. Its Frontyard Festival is importing heavyweight names from Jason Isbell to El Gran Combo de Puerto Rico in an age where touring has ground to a halt. They’ve even extended their outside, socially distanced setup to host broad community events like the upcoming free Live & Local Lunch matinee concerts, morning fitness class series Start Me Up and a Disney film series. The Dr. Phillips Center has turned an ad hoc response into something surprisingly holistic.

Best community rally: Will’s Pub crowdfunding campaign
Many music venues aren’t expected to survive the COVID calamity. But the Orlando community recently proved it’s willing to dig in both its heels and pockets to help keep the legendary Will’s Pub afloat. Beginning early in the shutdown, the local live music institution tried valiantly to diversify to stay open and not make its 25th anniversary its last. But package store sales, new merch line and food service plans have been mere band-aids for a decapitation. Finally in November, owner Will Walker gave in to community entreaties to open up a crowdfunding campaign. Within 24 hours of its public announcement, the Orlando scene and beyond rallied and donated about $20,000 on GoFundMe, double the initial goal. The drive racked up almost $35,000 before the fundraiser was closed. Will’s Pub is still far from being out of jeopardy, but at least it’s finally gotten back some of what it’s given to the community since the 1990s.

Best political merch: Anna Eskamani campaign shirts
As if a world-crippling pandemic wasn’t enough of a lark, 2020 will also go down as the year of a historical, democracy-at-stake U.S. election season that played out more like a civil war, fomenting the American body politic more than any in generations. Locally, progressive young state House Rep. Anna Eskamani eschewed the basic campaign logo T-shirts and, instead, caught scene fire with collectible-worthy punk rock-inspired shirts designed by constituents Sean Rice and Randy Reddell (of celebrated Florida band Dikembe) that co-opted the legendary Bad Brains and Black Flag logos. Eskamani won re-election handily to lock in our area’s progressive bona fides for another term.

Best punk-rock PAC: Debt Neglector
Of course, 2020 can’t just die with at least the satisfaction of resolution. No, control of the U.S. Senate — and with it, the very balance of the country — is still up in the air with two dead-heat runoffs in Georgia that won’t be settled until January. But rather than just sit by and bite their nails bloody like the rest of us, Orlando punk band Debt Neglector have been directly funneling aid to this critical domestic battle by sending 100 percent of sales from their fiery new EP (Bad Faith) to Fair Fight Action, the Stacey Abrams-founded voter enfranchisement organization that’s been in the Georgia trenches.

Biggest booking loss: Norsekorea Presents
An especially notable scene casualty this year is local indie promoter Norsekorea Presents. Under the NK flag, scene vet Kyle Raker built one of the last decade’s most reputable names in Central Florida by presenting some premier national names as well as giving a springboard to lots of the best homegrown talent. But — although details are still developing like lineup and whether it will be online or in person — there will at least be a proper sendoff with a show on Jan. 23 that will serve as both a farewell and a commemoration of 10 defining years of booking service in the Orlando scene. Thanks for all the great work, Kyle.