As Florida continues to break new records for daily coronavirus cases and deaths, the state is simultaneously witnessing a slow, confusing, vaccine rollout due to high demand from frustrated residents. But despite all this, two Republican lawmakers are slated as guest speakers at an upcoming anti-vaccine rally.

The Florida Freedom Rally will take place on Jan. 27 in Tallahassee, one of the busiest days during the Legislative committee week. The event appears to be organized by the Florida chapters of anti-vax groups Moms for Freedom and the Conscious Coalition. As of now, the two keynote speakers at this event are Sarasota Sen. Joe Gruters and failed mask-mandate lawyer and Howey-in-the-Hills State Rep. Anthony Sabatini.

“Help us protect Florida as a free state in the face of COVID-19. COME SHOW YOUR SUPPORT for our individual freedom to choose between the vaccine and other prevention strategies and life-saving treatments, consistent with informed consent, which the American Medical Association states is fundamental in both ethics and law,” says an event page on Free Florida, a far-right message board popularized during the initial statewide lockdowns last March that has since become a platform for anti-mask and anti-vaccine sentiment, as well as “stolen election” rhetoric. 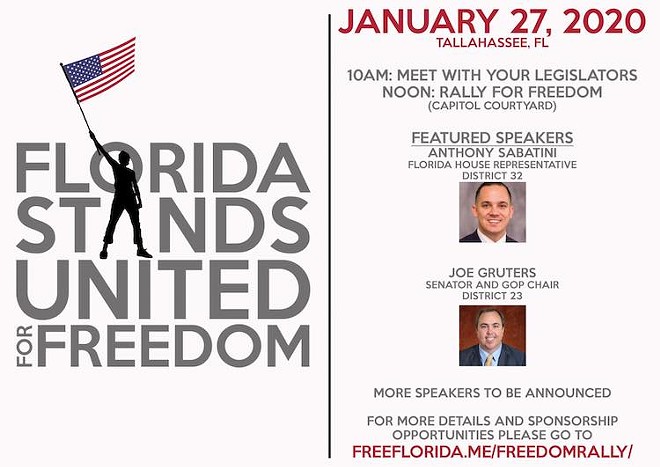 For the unfamiliar, the Conscious Coalition has a long history of pushing anti-vaccination legislation, specifically in California and Oregon, and is led by executive director Jonathan Lockwood, whose political statements the Denver Post editorial board once called "flat-out deranged." (See update at end of article.)

As for Moms for Freedom, the group seems to be primarily rooted in the anti-vax movement, but it has participated in various “Stop the Steal” rallies, anti-mask rallies, and various “Trump Trains” and boat parades around Tampa Bay. The group has also posted numerous QAnon and “plandemic” conspiracy theories.

In a Facebook post from Jan. 3, the Hillsborough County chapter of Moms for Freedom posted, “Just as a reminder, You’re not a hero for getting this VX. You didn’t do your research, you got manipulated. You didn’t think for yourself, you just obeyed. You’re not part of history, you’re part of an experiment. DO NOT COMPLY!”

It only makes sense that both of these anti-vax groups plan to host Sabatini and Gruters, who are both ardent Trump-supporters and both have recently proposed legislation that protects anti-vaxxers.

Last December, Gruters filed a bill protecting anti-vaxxers from discrimination by businesses. The bill, SB 364, would prohibit businesses from discriminating “on the basis of personal health information,” essentially meaning stores and restaurants can’t verify that a customer had a coronavirus vaccine shot before providing services.

“My fear is, you already see people showing vaccine cards,” said Gruters to Florida Politics. “I’m not anti-vaccine, I assure you. Go out and get it. But some people will choose not to be vaccinated, and they should not be discriminated against in public. I believe in the freedom to choose.”

Sabatini, who has repeatedly downplayed the severity of the virus and has coincidentally called for little to no government overreach when it comes to COVID-19, proposed legislation last November that would prevent Florida from instituting a vaccine mandate during a health emergency. The bill, HB 6003, would remove “the authority of the State Health Officer to order vaccinations upon declaration of a public health emergency,” amending Florida Statute 381.00315.

“Proud to file this important Bill — we MUST eliminate state's power to mandate vaccines and instead leave this personal medical decision up to each free individual citizen,” said Sabatini in a tweet.

This won’t be Sabatini’s first anti-vax rally. The lawmaker was also a guest speaker at the Unite Rally for Medical Freedom, which featured Vaxxed author and conspiracy theorist Del Bigtree.

The two Republicans join far-right fringe groups for an anti-vax rally as Florida health officials try to reassure residents that the vaccine is safe, and while the state attempts to vaccinate seniors over 65 years of age. As of last week, just 444,000 Floridians have received at least one dose of the vaccine, while nearly 1.4 million doses had been shipped to the state, reports the Tampa Bay Times.


UPDATE: After publication of this article, Lockwood emailed CL and said he is no longer affiliated with the Conscious Coalition and has no knowledge of the event, which he referred to as "irresponsible."

"As far as this event goes, and others like it, I think they are irresponsible," wrote Lockwood. "There are fair questions to raise about the legislation passed in regard to vaccines and the implications of that legislation — but the groups like QAnon and insurrectionists that have merged with harmless hippies and concerned parents are dangerous. People concerned about drug companies and their regulation should stay far away from engaging with domestic terrorists, outlandish conspiracy theorists and lawless antics and organize, fundraise and effectively work with lawmakers to amend legislation, pass legislation or pass ballot initiatives to bring about better oversight and accountability of drug companies. Whether it’s on their pollution, safety testing, or dark money and lobbying."

Proud to file this important Bill—we MUST eliminate state’s power to mandate vaccines and instead leave this personal medical decision up to each free individual citizen.https://t.co/qMB4ZzNUBz