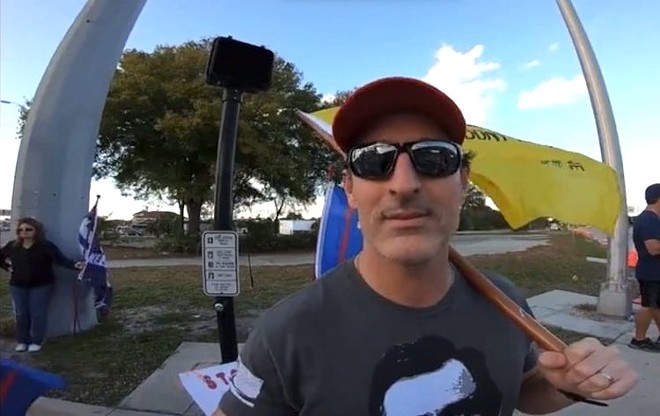 Some Casselberry residents are calling on their Vice Mayor and City Commissioner Mark Busch to resign after video surfaced of him making inflammatory statements the day before last week's insurrection in Washington, D.C.

Bush's words were captured on video for the website Rumble — the YouTube video-hosting alternative favored by conservatives.

The video, partially broadcast by Spectrum News 13, featured Busch hoisting a Gadsden "Don't Tread on Me" flag (of course) and speaking directly to the camera: "[Trump's] going to have 1-2 million people sitting outside of the Capitol … They’ve got the pitchforks and they got the torches and if they don’t do what they should be doing, watch out, all bets are off. And you know what, maybe we have to go through that. Because they’re just not listening to us. … I think at this point we don’t care anymore."

During Monday's city commission meeting, residents spoke out against Busch's actions, calling on him to resign in that forum as well.

Bush apologized "to the City of Casselberry and all its residents" during the course of the meeting.

An online petition "Vice Mayor/Commissioner Mark Busch Must Resign" is currently circulating, also calling on Busch to resign for taking "to the streets with far-right extremists to incite further harm and division to our county and beautiful city."

The petition has 299 signatures as of this writing.