Gideon's Bakehouse celebrated the grand opening of its Disney Springs location Saturday, Jan. 16, with a line of eager customers, many of whom traveled hours to get their hands on one of the bakery's massive chip-studded cookies.

According to Gideon's Instagram,  just 30 minutes after opening, there was a nine-hour virtual queue.

The bakery was in soft opening mode on and off in December and in the week leading up to the grand opening. At Christmas, the bakery experienced virtual queue times up to three and a half hours, according to Nicolette Warnke, a manager at the Disney Springs store.

"We do expect Saturday to be pretty busy," Warnke said on Thursday. "I think Saturday we will have a physical line forming well before opening."

When the bakery announced its grand opening date on Facebook and Instagram, they also told followers they were ready to sell their sweet treats starting Thursday morning. 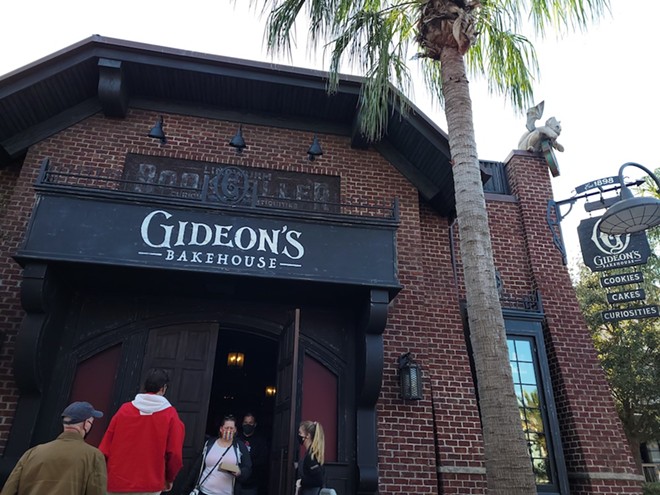 Warnke said business at the store was steady all that day. She said they had expected to be a little slow to start, because they only announced on social media that morning. "But we knew when people saw a line forming it would pique the interest of people," she said.

Hayley Greathouse, a furloughed cast member, and Phillip Goldberg, a Universal team member, live in Haines City and are very excited to have a Gideon's closer to them. Gideon's original location is at East End Market in Audubon Park.

"She loves these cookies," Goldberg said. "This store is gonna be really convenient."

Greathouse said that the whole experience at Gideon's, which is styled like a gothic bookstore, is great. "This location is so much fun. It feels like a whole different world when you step in," she said.