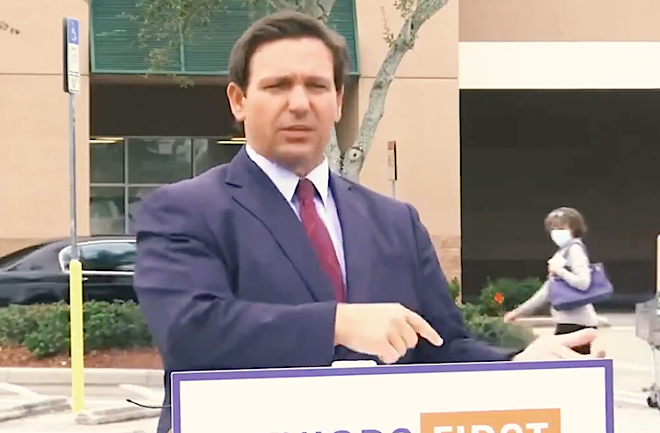 With a surge of 1,200 reported COVID-19 deaths during the past week, Florida on Saturday exceeded 24,000 resident deaths since the pandemic started last year.

The reported number of resident deaths stood at 24,004 on Saturday, up from 22,804 a week earlier, according to state Department of Health numbers. The total included 205 newly reported deaths Saturday.

The latest milestone came after cases and deaths have surged in Florida during the fall and early winter and as Gov. Ron DeSantis has focused on vaccinating seniors, who are particularly vulnerable to the virus. DeSantis has said relatively little about the soaring numbers of cases and deaths while touting the vaccination efforts.

“Florida has now vaccinated more than 500,000 seniors — far outpacing other states in the nation that are reporting updates on this critical effort,” he said in a video released by his office Friday. “This accounts for 60% of all Florida’s total vaccinations, and that percent is increasing with each week.”

But state Agriculture Commissioner Nikki Fried, a Democrat who is widely considered a potential election challenger to DeSantis is 2022, sent an email through her political committee Saturday that blasted the Republican governor.

“Floridians are suffering as Governor Ron DeSantis' herd immunity strategy fully takes shape,” the email said. “We must continue to wear masks, keep distance, and avoid crowds to protect ourselves and each other as infections continue to skyrocket.”

Florida has had 1,560,186 reported COVID-19 cases since the pandemic started, according to a Saturday report by the Department of Health. In addition to the 24,004 resident deaths, 376 non-residents have died in the state.

The numbers of deaths and cases have surged in recent months. As an example, the state on Oct. 16 reported 748,437 cases and 15,830 deaths of Florida residents. That means the number of cases has more than doubled in three months, while the number of deaths has increased by more than 50 percent.

Long-term care facilities have been hard-hit throughout the pandemic, with 8,813 reported deaths of residents and staff members as of Saturday. Most of those deaths have involved residents of nursing homes and assisted living facilities.

The largest numbers of deaths have been in heavily populated Southeast Florida. Miami-Dade County had 4,561 resident deaths as of Saturday, while Palm Beach County had 2,033 and Broward County had 1,957, according to the Department of Health.