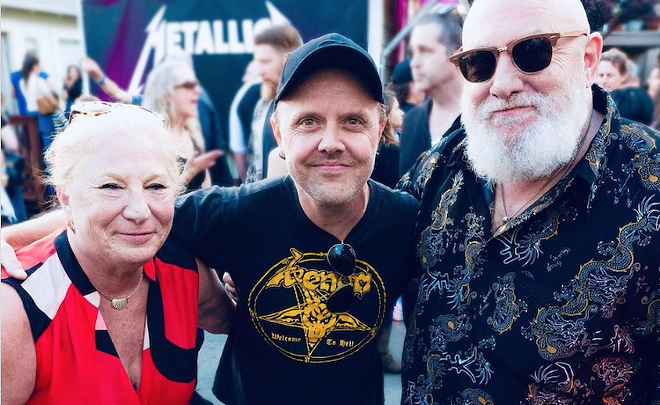 Marsha Zazula, a legendary metal maven, Megaforce Records co-founder, and Clermont resident, passed away due to complications from cancer at 68 last week.

If you, like us, spent any portion of your long-gone youth scouring liner notes on thrash metal cassettes, the names Megaforce Records and Marsha Zazula are no doubt familiar to you.

Independent label Megaforce was founded by Marsha and her husband Jon in 1982, for the express purpose of releasing a little album called Kill 'Em All by a then-unknown West Coast thrash band named (ahem) Metallica.

And though that's a lifetime of laurels right there, Megaforce and the Zazulas' Crazed Management would also boost other metal notables like Anthrax, Testament, Venom, King's X, Overkill and Raven from the underground into the mainstream.

Sincere and fulsome tributes have poured in for Zazula from metal icons not usually known for open-hearted sentimentality.

Metallica's Lars Ulrich called her a "selfless matriarch" in a tribute posted to his Instagram account. Ulrich thanked Zazula for "supporting us, for encouraging us, for advising us, for sheltering us, for feeding us, and most importantly for cheering us on and along with your husband Jonny, believing in the possibilities of how a gang of misfits and outsiders like ourselves could connect with a larger and likeminded audience."

Anthrax collectively hailed her on Facebook as "a true pioneer along with Jonny Z" on Facebook. "Those two were responsible for changing all our lives," read the band's statement. "Hard to put into words what a world this might be without their belief and dedication to metal and all of us."

If you're interested in more info on Marsha's life, her husband Jon's 2019 autobiography Heavy Tales, fills in the gaps on the couple's unlikely and all-star lives in metal.