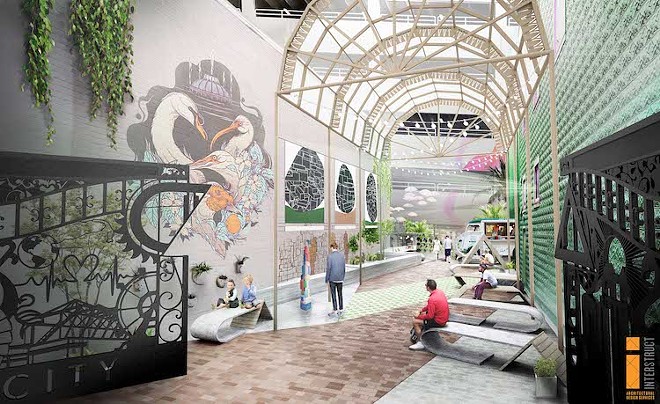 CityArts and the Downtown Arts District are poised to begin an ambitious overhaul of their outdoor courtyard space in downtown Orlando.

The end result will be a renovated, extended and radically different public plaza, wrapping around the north end of the CityArts building on Magnolia Street.

Fundraising for the project is already underway, with the recent Ford-ify the Arts celebration earlier this month.

"The vision is to create a beautiful public space in the heart of downtown Orlando," read a Ford-ify the Arts announcement. "This space will be used for diverse, inclusive, and creative arts engagement, as well as private gallery-related and specialty events."

The project is being overseen by Interstruct, Inc. and some design sketches have already been released (including the one you see above).

According to Bungalower, Lincoln Property Co. offered to give over some original items from the old Church Street Ballroom to be worked into the new courtyard structure, including vintage fencing, lattice and trusses.

The CityArts courtyard in its current form is the staging site for the monthly adventurous musical event the In-Between Series, as well as other CityArts-hosted performances. Over the last year, it's been a much-needed safer show space as we all try to avoid gathering in enclosed spaces.