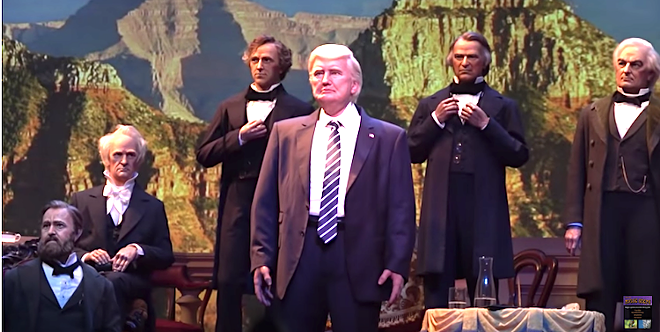 Walt Disney World's Magic Kingdom has temporarily closed the doors of its Hall of Presidents attraction to add a Joe Biden figure.

As spotted by WDW News Today, the plug was pulled suddenly on the Hall last night, with little fanfare besides a note about "refurbishment" going up on the Walt Disney World website (which, as we write this, refuses to load).

A Disney spokesperson confirmed to the Orlando Sentinel that the closure was due to updating the attraction to add a Joe Biden animatronic figure and, safe to say, update the current narrative flow of the show.

This same temporary closure happened in 2017 when the Donald Trump animatronic figure (or was it just a hastily repurposed Hillary Clinton robot?) was added to the Hall.

Rumors have been increasingly swirling that Disney is looking for a way to close and replace — Muppets? Hamilton? — the increasingly unpopular attraction.

As a final fond farewell, here's video of the time a Disney guest chanted "Lock him up," at the Trump robot. (Perhaps prescient?)