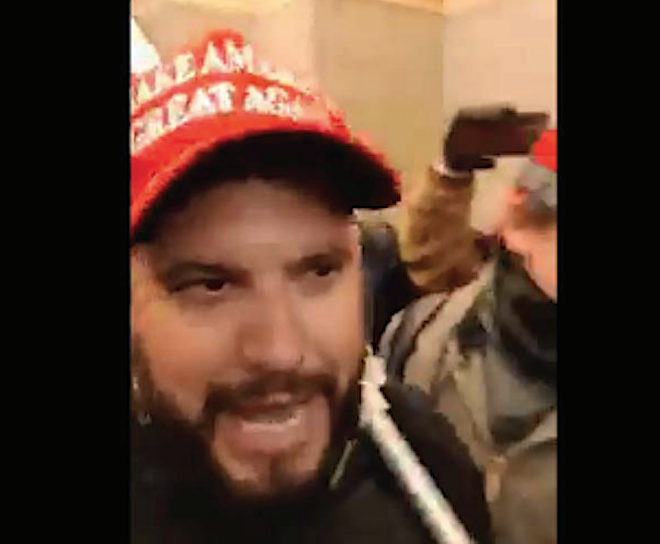 Gabriel Garcia, a South Florida man who ran unsuccessfully for the Florida House last year, was arrested Tuesday for taking part in the Jan. 6 storming of the U.S. Capitol, according to the U.S. Department of Justice.

According to a federal complaint filed on Sunday, Garcia faces charges of “certain acts during civil disorder, aiding and abetting; knowingly entering or remaining in any restricted building or grounds without lawful authority; and violent entry and disorderly conduct on capitol grounds.”

A statement of facts released by the Department of Justice said that Garcia uploaded two videos to his Facebook account showing scenes from inside the Capitol and at least one other video taken before he entered the building.

One of the indoor videos depicted an aggressive confrontation with U.S. Capitol Police officers, the report said. In one of the videos, Garcia turns the camera on himself and says, “We just went ahead and stormed the Capitol. It’s about to get ugly.”

The report said a large crowd surrounding Garcia then chanted “Our house!” Garcia, a former captain in the U.S. Army, later asked a police officer, “How does it feel being a traitor to the country? How does it feel?”

In CCTV footage of the Capitol Rotunda, Garcia is reportedly heard shouting “Nancy come out and play” and saying “Free Enrique.”

The report noted Garcia's second comment “is an apparent reference to Enrique Tarrio, the Miami-based leader of the right-wing organization the ‘Proud Boys,’ who was arrested in the District of Columbia on Jan. 4, 2021.”

Oliva poured money from his political committee, Conservative Principles for Florida, into the Citizens for Ethical & Effective Leadership committee, which backed an online and direct-mail campaign that attacked Perez. Perez defeated Garcia by 18 percentage points in August before fending off a Democratic challenger in November.