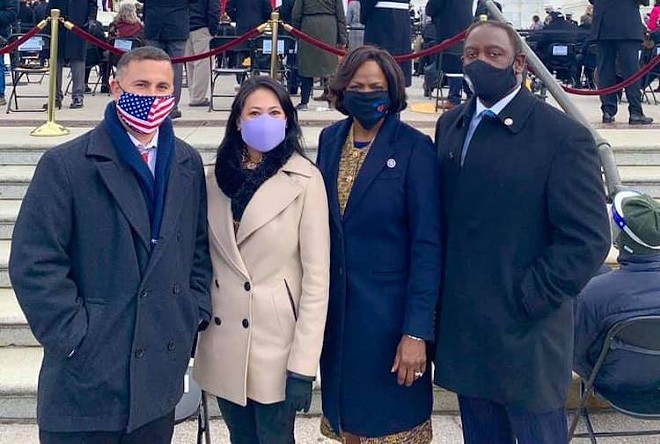 QAnon ride-or-dies are having a tough week. Their entire world came crashing around them Great Pumpkin-style when Donald Trump did not, in fact, lead the arrests of every single Democratic attendee at Joe Biden's inauguration on Wednesday. ("We all got played," wailed one unfortunate.)

And now Murphy, a member of the House Armed Services Committee and a former national security specialist at the Department of Defense, is making moves on a bill, the Security Clearance Improvement Act of 2021, that would prevent QAnon true believers, or anyone who participated in the unsuccessful Jan. 6 insurrection in Washington, D.C., from receiving or holding on to federal security clearance.

An individual must possess this clearance status in order to qualify for a national security position or to access classified information. This proposed Act would add new questions to existing — and exhaustive — background check paperwork seeking to root out QAnon enthusiasts or participants in the Jan. 6 violence in D.C.

“Any individual who participated in the assault on the Capitol or who is a member of the conspiracy movement QAnon should be required to disclose this fact when applying to obtain or maintain a federal security clearance,” said Murphy, in a press statement. “It is highly unlikely that such an individual will be found by investigators to have shown the conduct, character, and loyalty to the United States that is a prerequisite to holding a national security position and viewing classified information.”

“If any Americans participated in the Capitol attack, or if they subscribe to these dangerous anti-government views of QAnon, then they have no business being entrusted with our nation's secrets,” Murphy emphasized to the Daily Beast.

A summary of Murphy's Security Clearance Improvement Act is online.