American Airlines has too much wine, and they want to deliver it to your house

You might not be traveling anywhere anytime soon, but American Airlines is here to help you get through the pandemic without ever having to leave your home.

In June, airlines stopped selling alcohol on planes as a precaution to ensure adequate mask-wearing on flights. That left them with quite a lot more booze to store than they had planned for.

Now half a year on, American has found a way to deal with the surplus: a home delivery wine club. Speaking with the Dallas Morning News, American Airlines spokeswoman Leah Rubertino explained the program came out of a conversation with wine management partner Intervene. According to Rubertino, initially, the program will help with the airline's excess wine. Then it will remain active after the pandemic, as a way for customers to stay connected with the airline even when they’re not traveling.


Wine clubs have become a popular way for brands to reach their fans in new ways. Sunset Magazine, the Wall Street Journal, Martha Stewart, Blue Apron and the New York Times all feature wine clubs. In 2017, NPR launched a wine club; some bottles feature custom labels that pun on the names of popular NPR shows, like "All Grapes Considered" malbec. (None dubbed "Wait Wait Don't Drink Me," though.)

Unlike many, American’s wine club provides a direct link to the airline experience. All the featured wines are part of the airline’s Flagship Cellars program, which selects roughly 2,000 bottles each year. Before being served, the wines are reviewed by a diverse collection of American team members. If chosen, they’re served onboard American flights and in the airline’s lounges. The process has proven successful for the Fort Worth-based airline, which consistently ranks as the top airline for its wine service. 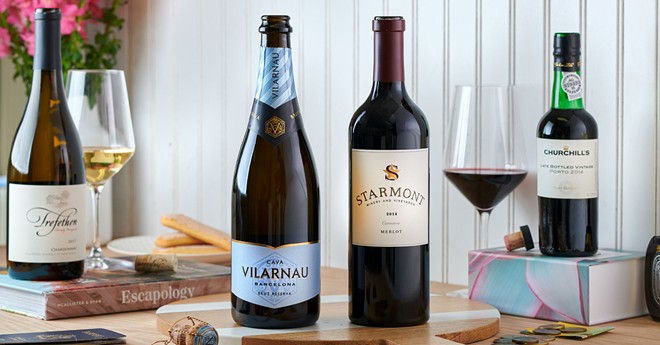 “For wine lovers around the world, wine provides a deeper connection to the places they enjoy visiting,” said Alison Taylor, Chief Customer Officer at American. “We created Flagship Cellars to provide more ways for customers to enjoy our Flagship wine even if they aren’t flying in one of our premium cabins.”

According to American, customers can select from curated collections of mixed wines, build their own custom box, or purchase a monthly wine subscription which “includes three prestigious wines for $99.99, including delivery.” For customers who sign up early, the airline will even throw in a complimentary bottle. Members of the American Airlines AAdvantage loyalty program will also receive two miles for every dollar spent on the wine club.

The wine deliveries are available throughout the United States to anyone 21 years of age and older.
–
Stay on top of Central Florida news and views with our weekly newsletters, and consider supporting this free publication. Our small but mighty team is working tirelessly to bring you Central Florida news, and every little bit helps.