Blue Man Group may leave Orlando for good — has Universal outgrown them? 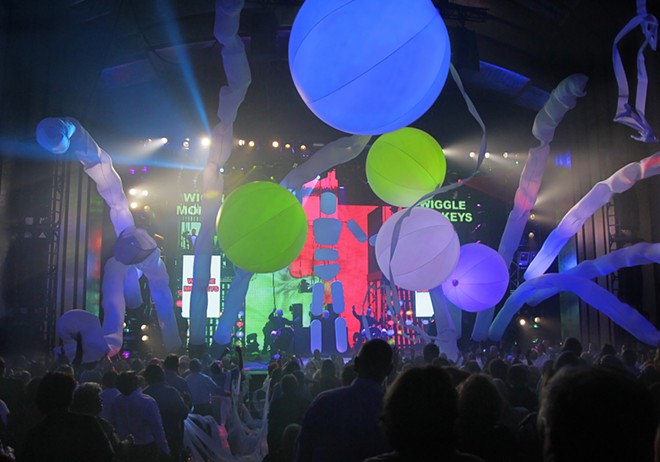 The pandemic has caused a lot of people to move out of the Orlando area, but three very recognizable men may now be joining that list. After a 13-year run in the City Beautiful, the Blue Man Group is rumored to be moving on.

Industry analyst and writer Josh Young, known for his reliable insider reporting regarding NBCUniversal’s resorts, reports on his Theme Park University site that the Orlando show is "extremely unlikely" to be returning. The show closed early last year as a pandemic precaution. When Universal Orlando reopened a few months later, the CityWalk show remained dark. This didn’t come as much of a surprise as Blue Man Group’s parent company, Cirque du Soleil, has been struggling since early last year.

After years of declining sales and mounting debts, Cirque du Soleil was forced to declare bankruptcy over the summer, laying off 95 percent of its workforce. In 2019, the company had more than a billion dollars in revenue; by the time the company filed for bankruptcy, it was reported to have around that same amount in debt. By November, the company emerged from creditor protection with two new board members, new owners and a restructuring plan. Two shows have reopened in China and Mexico, but in the U.S. and Canada, the company is in a waiting pattern as it waits for the pandemic to subside.

Launched in Montreal in 1984, the small startup saw positive reception wherever they performed, though financial concerns held them back. Conflicts between leadership also slowed down any plans for further growth. By the early 1990s, the company had begun touring the United States, finding success with a short residency in Las Vegas. This led to its first permanent show, debuting at the brand-new Treasure Island Hotel and Casino in late 1993. By the time it opened, there were already talks underway to open a second permanent show, this one at Walt Disney World.

Treasure Island was an early participant in the “Disneyfication” of Vegas. The idea was to diversify the guest demographics, which had relied heavily on adults without kids. In Florida, Disney was using this exact same business plan.

By the late 1980s, the Vacation Kingdom had become the global leader in family vacations, but Disney C.E.O. Michael Eisner wanted to expand its client base and make it more than a place with hotels and theme parks. Pleasure Island had opened in 1989, being the first major area of Walt Disney World off-limits to children. The nightclub district was soon followed by multiple convention centers, a wedding chapel, a massive sports complex, and a second entertainment district with its own nighttime entertainment.

Next to Pleasure Island, Disney sought to augment its dining options with celebrity chefs and entertainment like that of Vegas. The Downtown Disney West Side opening in 1997 with the long-anticipated Cirque du Soleil show, La Nouba, debuting the next year. The Disney Decade was a success, with every new opening seeing ever-larger crowds.

Up the street at Universal, things couldn’t be more different. Islands of Adventure opened in 1998, with CityWalk coming online a year later. Despite its own adult-focused complex and an impressive new theme park, the billion-dollar gamble known as Universal Studios Escape wasn’t seeing the massive crowds that had been predicted.

The resort saw another major hit when in 2005, Nickelodeon closed its kid-friendly studios at Universal Studios Florida. The empty studios allowed Universal to bring in its answer to Cirque du Soleil. 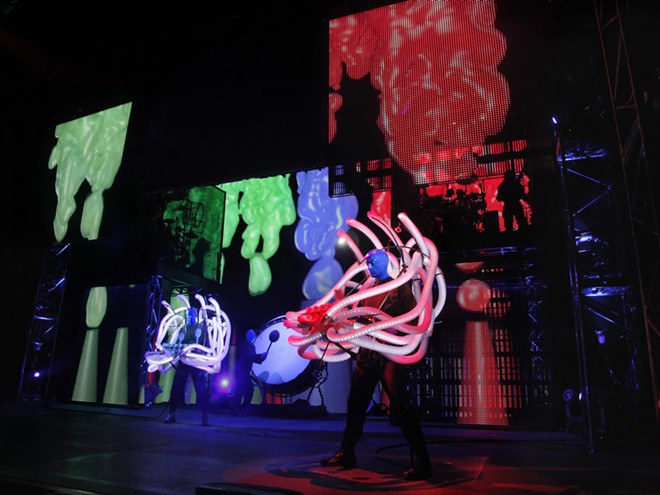 The Blue Man Group opened in the space, rebranded as the Sharp Aquos Theater, in 2007. Six days before Blue Man Group's debut, Universal announced it would be opening a new land dedicated to the Harry Potter film franchise. It was the beginning of a new era for Universal. That one week forever changed Orlando tourism. After years of trying to get out from under Disney’s shadow, Universal was finally becoming a destination in its own right.

Throughout the first two decades of the new century, Cirque du Soleil was also changing the game. Just a decade after opening its first permanent show, the company reported annual sales topping $500 million and growth of up to 20 percent. Plans were in place for a fourth show in Vegas, leading some to begin questioning how long the growth could last. The apprehension didn't stop Cirque's growth. The company was on fire and its founder, Guy Laliberte, once a struggling street artist, was now a billionaire. In 2009, Laliberte became Canada’s first space tourist when he took a 10-day, $35 million trip to the International Space Station. Meanwhile, Cirque's growth continued unabated.

The massive growth began catching up to the company late last decade after multiple announced projects failed to be realized, including a theme park in Mexico and a chain of indoor family entertainment centers. During this time, Cirque du Soleil began buying out its competition, including Blue Man Group in 2017.

The following year, Moody's downgraded their credit rating to B3, but that didn't stop the debt-fueled buying spree. Another acquisition by the company, this time for magic show company The Works Entertainment, in February of 2019 gave Moody's cause for a warning. In a statement affirming the B3 rating, Moody's notes,

"Though Cirque du Soleil continues to expand into new types of shows and experiences and invests for growth both organically and through acquisitions, we believe that the company's largely debt-funded expansion strategy could be unsustainable, resulting in financial strain on core operations and leaving minimal flexibility to address operating weaknesses when they arise."

Eight months after Moody's warning, Cirque du Soleil debuted its latest show, R.U.N. After a four-month run filled with negative reviews and poor sales, the show was canceled. It was the latest in a string of failures by the company.

“I don't think people understand how bad things are for Cirque du Soleil. They believe the pandemic is to blame for their financial issues, but they were in trouble pre-COVID. Poor decisions got the company into nearly a billion dollars in debt, and those poor decisions continue following the bankruptcy,” explains Scott Roeben, the voice behind the popular Vegas news site Vital Vegas.

Roeben was an early voice warning of Cirque’s rapid expansion and over-leveraging of their name. According to Roeben, prior to the pandemic things weren't looking great for Cirque and it was no secret that shows weren't seeing the attendance they once did.

He explains the Blue Man Group purchase was to help differentiate the acrobatic circus company’s offerings. “Blue Man Group was seen as a way for Cirque to diversify, as they knew their core business had hit a plateau. In markets like Las Vegas, there was a saturation point, and some of the shows have been running for many years."

Going forward, Roeben warns things may get worse for Cirque du Soleil. “Now, faced with COVID losses, with no real sense of when Cirque shows can reopen, the company is faced with having to scrutinize its roster of shows, deciding which will reopen and which will close. Zumanity won't be back in Las Vegas. Other shows have been mentioned as being on the chopping block as well, although Cirque has made a very public show of saying contracts have been extended. These are challenging times for entertainment companies, but in the case of Cirque, that's a gross understatement. Things are unlikely to change unless the leadership of Cirque du Soleil does.”

Meanwhile in Orlando, Universal no longer needs the tit-for-tat competition with Disney. The Blue Man Group theater, rarely filled to capacity, could now be better used as expanded space in the crowd theme parks. In recent years, Universal has actively worked to decrease the number of third-party offerings within their resorts. The company has instead developed its own restaurant and retail offerings, including popular spots like Toothsome Chocolate Emporium and Red Oven Pizza Bakery. When it does work with an outside company, instead of going for the celebrity names, they’re focusing on lesser-known brands that have a cult-like following, such as the Cowfish Sushi Burger Bar and Voodoo Doughnut. In this new era of emboldened Universal parks, Blue Man Group and the uncertainty surrounding its parent company may be too much.

According to Young, the resort is looking at once again including the space as part of the Universal Studios Florida theme park with the possibility of adding a show there. Young believes this may be part of Universal's 2022 offerings. Signs point to next year being positive for the tourism industry overall as people take their first major summer vacation since the pandemic. It’s too late for parks like Universal to add a major new ride, but something like a stage show could be easily introduced once it's safe to have large indoor crowds.

Since Nickelodeon’s closure, Universal Studios Florida has suffered from a lack of kid-friendly attractions. One likely candidate for the space is the How to Train Your Dragon stage show, known as Untrainable, that will be in the soon to open Universal Studios Beijing. Replicating the How to Train Your Dragon show in Orlando would also allow the resort to gauge guests' interest in the franchise ahead of Epic Universe, Universal’s new theme park where a land is rumored to be based on the animated property.

A new Cirque du Soleil show, Drawn to Life, is still slated to open at Disney Springs. That show was to debut in early 2020 but has been postponed due to the pandemic. No official opening has been announced, but Disney has listed it in the lineup of attractions expected to open this year.

Orlando Weekly reached out to both Universal Orlando and Blue Man Group on whether the Orlando show will be closing and what may replace it. Neither has responded. but we will update this story with comment when they do.