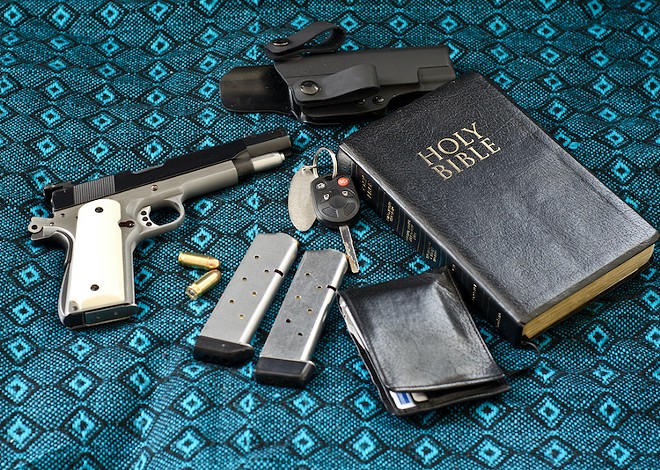 A proposal that would expand the authority of people to carry concealed firearms at religious institutions began moving forward Monday in the Florida Senate.

In a party-line vote, the Republican-controlled Senate Judiciary Committee backed the measure (SB 498), which would allow people with concealed-weapons licenses to bring guns on properties that churches, synagogues or other religious institutions share with schools.

While the bill seeks to lift that prohibition, property owners could still stop people from carrying firearms, said bill sponsor Joe Gruters, a Sarasota Republican who also chairs the Republican Party of Florida.

“The church would be authorized to be able to do whatever they want in terms of restrictions,” Gruters said. “They don't have to allow people to carry guns. They could say, ‘Only carry guns during certain times or during certain periods or certain days.’ But essentially, the church would have the same ability as the other churches have now.”

“Obviously, a determination was made that guns are just too dangerous, accidentally to go off or on purpose,” Polsky said. “I don't understand why, because there's a church that operates on a school property or has a school on the premises or in the basement, why suddenly they need to be armed.”

Since then, the proposal has fared better in the House, which approved it in a 79-35 vote in 2019. It did not pass the Senate.

Longtime National Rifle Association lobbyist Marion Hammer, representing the Unified Sportsmen of Florida, said the proposal is about restoring the private property rights of churches, synagogues and other religious institutions.

“People who go to church are being deprived of the same rights that they have when they go shopping and into a business or a private property of an organization or entity,” Hammer told the committee. “Just because the church has a private child-care program or private preschool program does not mean the government can hijack its private property.”

The proposal drew opposition from the Florida PTA, the League of Women Voters of Florida and the Florida Coalition to Prevent Gun Violence.

Pointing to massacres at religious institutions in Charleston, S.C. and Pittsburgh, Trish Neely of the League of Women Voters of Florida suggested alternatives to address concerns about increased violence, from limiting access points to hiring trained security.

Gruters' proposal is scheduled to next go to the Senate Criminal Justice Committee, which is chaired by Sen. Jason Pizzo, a North Miami Beach Democrat.