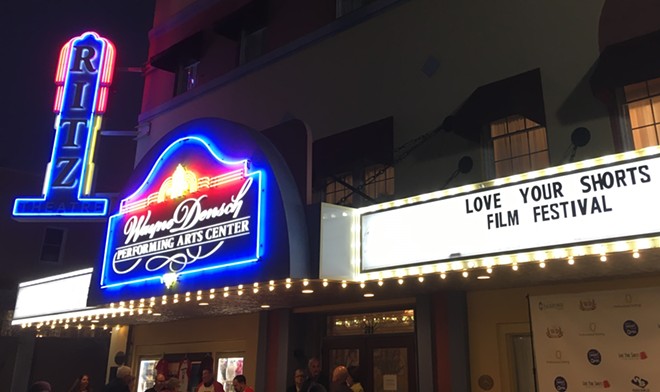 Love endures, even in the age of coronavirus. Love of short films, that is.

Taking cues from other recent, local festivals that have been held safely, Sanford’s Love Your Shorts Film Festival will take place on Valentine’s Day weekend — Friday-Sunday, Feb. 12-14, 2021 — as it has for the last 11 years.

Though this year’s fest will include slightly fewer films than in the past (62, down from 81 films in 2020 and 77 in 2019), attendees will notice bigger changes. For instance, Thursday’s “education day” will be gone. Also absent will be parties and discussion panels, replaced by mask mandates and a 50-percent cap on attendance inside the historic Wayne Densch Performing Arts Center. (But because the theater’s capacity is about 500, a sizable crowd is still possible.)

Perhaps the biggest alteration will be the ability to watch the entire festival — and vote for your favorite movies — from home.

“The streaming has … been a huge challenge,” says Brian Casey, festival president. “We are planning on having each block available to stream and watch as it is being shown in the theater. There will not be an on-demand option to use later or the ability to watch film by film, as this complicates things with voting. We are intending for voting via our text system in the theater to also be open to the online viewers live but are still testing that system. As we firm everything up, we will post the instructions on our website for easy access by the public.”

An even bigger task, according to Casey, is maintaining the festival’s standards while keeping attendees safe.

“For me, the biggest challenge in putting the festival together is how to put on our typical quality festival safely,” says Casey. “Our goal has been to put on an event that is safe for the audience, attending filmmakers and our board members and volunteers. Fortunately, the Wayne Densch Performing Arts Center has been having live shows and plays, as well as movies, for the past few months and have put in the hard work to figure out the theater-seating aspect: with reduced capacity, assigned seating to maximize social distancing, mask mandates and general cleanliness to provide a safe environment for attendees.

“For the safety of filmmakers and volunteers, we have had to forgo some of our usual gatherings, such as the opening-night party, Saturday and Sunday after-parties and Sunday filmmakers breakfast. We will still be offering a pared-down version of the filmmakers lounge but not encouraging indoor gathering, but rather providing outdoor seating and a sort of a grab-and-go offering for the filmmaker’s lounge.”

The festival will begin Friday, February 12, at 7 p.m. with seven films of different genres. The fest continues on Saturday with the family-friendly “E for Everyone” block at 10:30 a.m., animation at 1 p.m., documentary at 3 p.m., international at 5 p.m., comedy at 8 p.m. and sci-fi/horror at 10 p.m. The event wraps on Sunday with drama at 1 p.m., “Florida Flavor” at 3 p.m. and “Best of the Fest” at 7 p.m. (That final block will include the best from the previous nine groups, as voted by the audience. A team of judges then will select the overall champion.) All films are less than 30 minutes in duration.

Despite that worldwide vibe, the festival always has a strong Sunshine State feel, and not just in Sunday’s “Florida Flavor” program. Scattered throughout the blocks this year are 18 Florida films, including at least seven from filmmakers with Orlando connections, including The Mechanical Dancer by Jenna and Joshua Jaillet, Heritage by Dale Metz and TL Westgate, The Next Stop by Janice Derosier, Resilient by Gusta Shine, Lost Memory by Jill Minton, Coming Home by Joey Maxwell and Son of a Sweeper by Lisa Mills.

Perhaps the biggest question facing all festivals is whether COVID-19 is reducing the number of submissions. Are filmmakers – many of whom remain in lockdown, still making movies?

“We wondered if film submissions would be down this year because of all the pandemic hurdles that filmmakers had to deal with, but that was not the case,” says Gene Kruckemyer, festival co-founder. “We had more films than ever submitted. Maybe filmmakers had more time to put finishing touches on projects while staying at home. Several of the films submitted this year were even about the pandemic.”

A ticket to a single block of films costs $10 (except the “E for Everyone” block, which is $3), and a pass for the entire festival sells for $75. For more information, visit LoveYourShorts.com.