February 09, 2021 at 3:04 PM
comment
He said he'd do it, and he did it. Wait, what are you talking about? Because we're referring to the Gronk's post-Super Bowl trip to Walt Disney World on Monday.

While Brady hasn't penciled in his promised trip to the Orlando theme park yet, the ever-eager Gronkowski — Gronk Spike innovator, WWE wrestler, and son of the very focused Gordy Gronkowski — barnstormed the park the very next day. 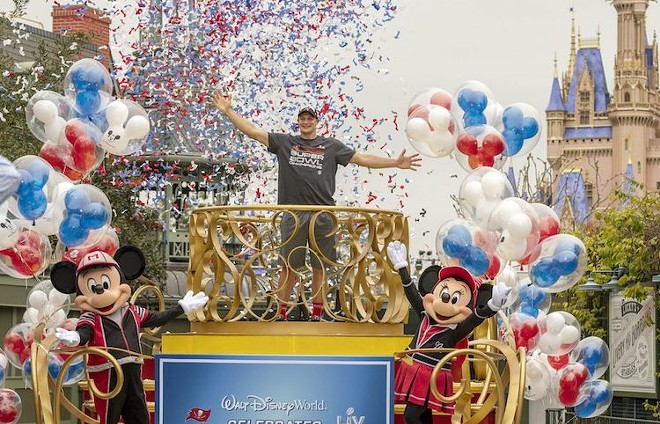 From the looks of a series of positively ebullient photos published by the Disney Parks blog, Gronkowski pretty much squeezed every drop of joy he could out of it.

Lightsabers, teaching Mickey and Minnie the Gronk Spike, a twirl on Big Thunder Mountain, a video for TikTok, wearing a mask like a civilized park guest — all checked off the list.

The traditional parade down Main Street USA didn't happen due to safety concerns around the pandemic, but in the evening Cinderella's Castle was illuminated in red to mark the Buccaneers' win.